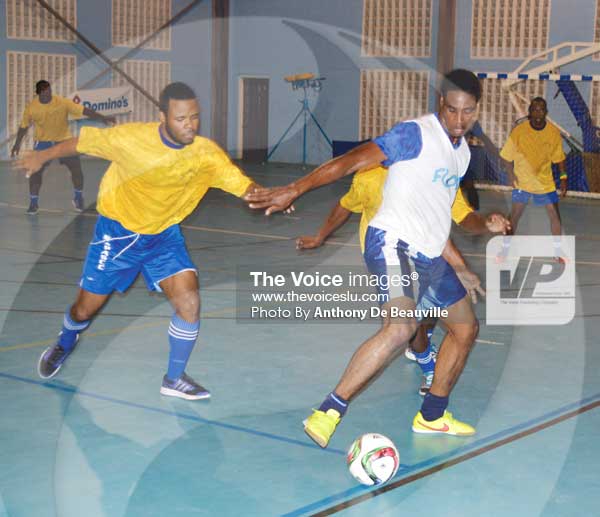 It can best be described as the second largest crowd ever at a Futsal Football third place and finals at the Beausejour Indoor Practice Facility.

Last week Friday despite the main doors being shut, the loud shouts could have been heard in the distance coming from the patrons who attended. But one thing for certain they got their monies worth as 21 goals were scored in the two matches played.

For the third place play off silver it was a ding dong battle between ECFH and Lazy Lagoon as a record 15 goals were scored Lucan John opened the flood gates with goals in the 1st and 5th minutes of the encounter. For ECFH Dwain Poleon pulled one back to cut the deficit by one. Two minutes later ECFH with their crowd support behind them started growing in confidence and in the process found the much deserved equalizer from the boots of Frankly Dupigny (8th minute), but Lucus John again put Lazy Lagoon in the lead for the second time in the half to make it 3 – 2 and to seal a hat trick for himself.

The goal scoring feast was far from over as Walker Carpasso put Lazy Lagoon further ahead in the 11th minute. Poleon found the back of the nets for the second time in the encounter to equalize once again and for the first time ECFH nosed ahead when Marvin Gustave scored in the 13th minute. That celebration was short lived as Lazy Largoons Marco Esper made it goal number 5 in the 15th minute. With determination written all over their faces ECFH had enough left in the tank before the half time whistle to score another in the 16th minute when Kurleigh Solomon’s goal equalized the scoreline 5 – 5.

Going into the second half it was ‘game on’ as there was no letting up for the goalkeepers on the resumption. This time it would be ECFH that took the lead in the 21st minute through Robin Dwarkasigh. Ben Gilmore, despite throwing a couple of easy scoring opportunities in the first half, made amends when he scored his first in the 25th minute to make it 6 – 6. The pendulum once again moved towards ECFH when Dwarkasigh scored in the 29th minute to make it 7 – 6; by then the crowd was on its feet when Lazy Lagoon is Lucus John scored an own goal to put ECFH further ahead in the 37th minute, 8 – 6. At that time it was all to play for. With less than two minutes remaining on Referee Leo Clarke’s watch, Gilmore was still able to put one in for Lazy Lagoon in the 38th minute to make it 8 -7 in favour of ECFH and that’s how it remained up until the final whistle.

By then the atmosphere had gone up a few notches so to the heat inside the BIPF was unbearable. But for some it was all right as all eyes were glued on centre court for the much anticipated showdown between FLOW and the St.Lucia Air and Sea Port Authority. FLOW was quick off the blocks when Aaron Sylvester put them ahead in the second minute of play, Anthony Christopher equalized in the fourth minute with an own. It was all SLASPA when Guy Jn Baptiste made it 2 – 1 in the 10th minute to secure the half time lead.

On the resumption SLASPA supporters had something to cheer about when Andrew Charles found the back of the nets. That celebration was short lived as FLOW; Alex Rosemond cut the deficit by one to make it 3 – 2 in the 25th minute.By then the SLASPA supporters were chanting “defence” with one goal up, but they got more than they were crying for as Ardan Etienne sealed the deal on the whistle when he scored in the 40th minute to give SLASPA the first ever Futsal Corporate Warfare Title.