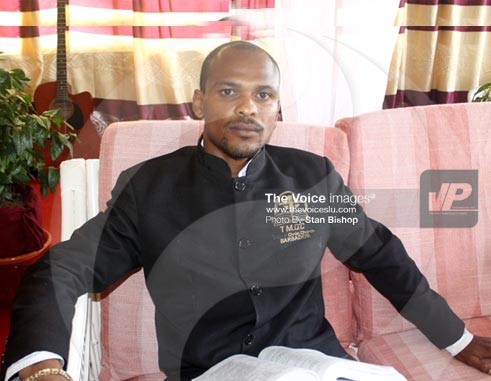 Organizer Says Show Will Go On.

DESPITE strong opposition from a clergyman, this week’s Miss Gay Universe Pageant will go ahead as planned.

That’s the latest word from organizer, Sharmark Leon, who told The VOICE yesterday that despite the clergyman’s concerns about the moral implications of the event, he is not breaching anyone’s human rights nor breaking the law.

“I’m not a churchgoer, but I’m a Christian in my own right,” Leon said. “Besides, a lot of planning went into my show, so I’m not going to cancel my show because a pastor has a problem with it.”

On Tuesday, Apostle Seon Moore, pastor of Nation Builders for Christ, located on Brazil and Broglie Streets, told The VOICE that he has received a direct command from God that the gay pageant should be cancelled. He said he has since passed on that information to Leon. The show, he said, “will not succeed”.

“I have cancelled it in the realm of the spirit because this event is giving a bad signal to a Christian nation,” Moore said. “We have our young men and women coming up. What message are we sending?”

Moore, who is originally from Barbados but has been living in Saint Lucia for a year now, said that while some people might consider the pageant “a normal event and allow it to go on”, there are serious consequences to consider.

“What will happen in the long run? What will come out of it that would be morally-correct and spiritually-correct? The Bible does not support such a behaviour and lifestyle. So we cannot as Christians allow it to just happen and become a national event,” Moore said.

Asked why he zeroed in on the pageant, Moore said that while there are other issues in the country that warrant the church’s intervention, the task at hand is to discuss the pageant. Failure to heed God’s law, he said, would be catastrophic.

“If they do not stop this event on Friday, then God’s wrath is going to come upon those who are supporting it,” Moore said. “When we promote this as a society, we’re going against the very fabric of what we believe as a people.”

Quoting Romans 1:25, Moore said that as an ambassador for Christ, he will not sit idly while the laws of God continue to be breached. He said that upon finding out about the show for the first time last Saturday, he was opposed to it being hosted for fear it becoming a key staple here.

“We’re not marginalizing anyone or being inhumane in saying that they’re not supposed to live their lifestyle,” Moore said. “However, don’t make it a Miss Gay Universe Pageant because it’s going to become a yearly event and something bigger.”

Asked why he was keen on opposing a privately-organized event not unlike what has become the norm in other free societies, Moore said that while many churches fear undergoing persecution for what they stand for, he stands apart.

“People today are not willing to die for the cause of Christ,” Moore said. “I’m willing to give my life for what I believe in. That’s what separates me from a lot of pastors.”

Nevertheless, Leon believes that despite the criticisms being levelled at his event, he reserves the right to organize his show. He said that after being contacted by Moore recently, he respectfully explained that his pageant is targeting a specific audience.

“Those who have a problem with my show need to speak out on the rapes and violence occurring in our country,” Leon said. “My show has its sponsors and supporters and that’s fine with me.”