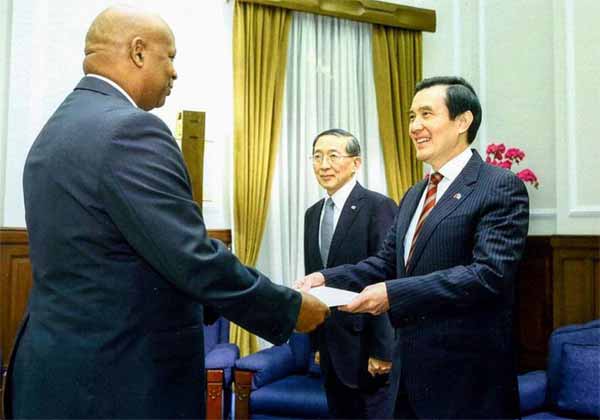 The ceremony last Thursday included a military guard of honour and marching band. Also in attendance was Foreign Minister David Lin and other senior officials from the Foreign Ministry.

In welcoming Ambassador Emmanuel to Taiwan, President Ma Ying-jeou noted the already strong ties which exist between our two countries with cooperation in Agriculture, Education, Healthcare among other areas.

On agriculture he stated he was very pleased during his visit to Saint Lucia to see the progress made under the agricultural cooperation projects. On education he stated that a number of Saint Lucian students have received scholarships to study in Taiwan with over 30 having completed their studies and returned home. He said he hoped that the presence of the Embassy there will create more opportunities for students from Saint Lucia to receive scholarships in the future.

Ambassador Emmanuel also thanked the President for his government’s role in facilitating the establishment and operation of the Embassy in Taiwan. He specifically mentioned the role played by Foreign Minister David Lin and his staff and in particular the Embassy of the Republic of China (Taiwan) in Saint Lucia.

Finally, Ambassador Emmanuel stated that as the first Ambassador from Saint Lucia, he will work diligently to ensure the goals of the two governments in strengthening the bonds of friendship and cooperation are met, while at the same time, making Saint Lucia a household name in the Republic of China (Taiwan).