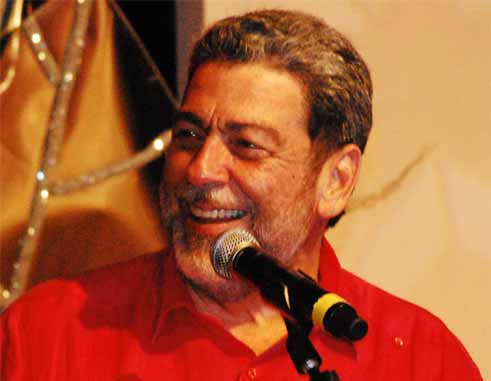 Gonzalves announced the election date Saturday night during a mass public meeting of his ruling United Labour Party (ULP) which has been in power since 2001.

Although the ULP was returned in 2005, and 2010 it has seen a gradual erosion of its popular support over the years from 56.5 percent to 53 percent. By contrast, its main rival, the National Democratic Party (NDP) led by Arnhim Eustace has seen its support surge from 40.9 percent to 50.4 percent. Five years ago, it came close to upsetting the ULP winning seven seats to the ULP’s eight in the 15-member Parliament.

Gonzalves’ party was rebuffed in a referendum on constitutional change three years ago when voters rejected the idea.

Reports from Kingstown indicate that the December 9 contest will be another tight race between the two rival parties.

In common with other countries of the sub region, the main problems facing St Vincent and The Grenadines are low economic growth, rising debt and unemployment. But Gonzalves contends that his party’s policies and programmes have benefitted the nation, and listed 20 of them, which he said had transformed St. Vincent and the Grenadines.

The government is touting the imminent opening of a new international airport among its major achievements. But the project has far exceeded the original cost and its opening has been rescheduled on several occasions. Still the hope is that Argyle International Airport will boost the island’s economy in the years to come.

The government had previously said the airport would be complete by year-end, but critics, citing the scope of work yet to be done, have said that this is highly unlikely.

The government said its biggest priority in a new term would be the creation of jobs and wealth, followed by the push to zero hunger and the further reduction of poverty.

Gonzalves tolds a recent public meeting: “By the end of our next term, not one single man, woman or child is going to go to bed hungry in any night in St. Vincent and the Grenadines.”

The ULP has also promised 12 megawatts of geothermal energy by the end of 2018, a new hospital to be finance by the World Bank, the creation of a new city at Arnos Vale, stepped up activity in housing and education among other projects.

The main opposition New Democratic Party (NDP) says it is ready to lead and will expand the Vincentian economy into new areas if elected to office.

And NDP president, Leader of the Opposition Arnhim Eustace, told party supporters on the weekend that the party’s development projects, backed by foreign direct investment, “are on train to begin”.

Among these, he mentioned an EC$75 million state of the art hospital, which he said the party will build.

“We are determined … to expand the economy into new areas, particularly through information technology while we bolster the traditional economy — reinvesting in agriculture,” Eustace told a rally in Calliaqua on Saturday during which the NDP unveiled its plans for improving healthcare in St. Vincent and the Grenadines.

“And we are determined to turn our backs on this long period of low growth in St. Vincent and the Grenadines and high debt,” he said.

Eustace told the gathering who braved intermittent showers at the event that the party’s slate of candidates are “proven leaders, hard workers” who will take the country “out of the red, and bring it into the light of economic revival.

“And we will do all of this by practicing a new brand of politics — where bad behaviour in office; where nepotism and corruption; waste, and insults, bombast; where personal irresponsibility will become a thing of the past,” he said.

He said the NDP is determined not just to build another society, “but a just society based on morality, transparency and meritocracy.