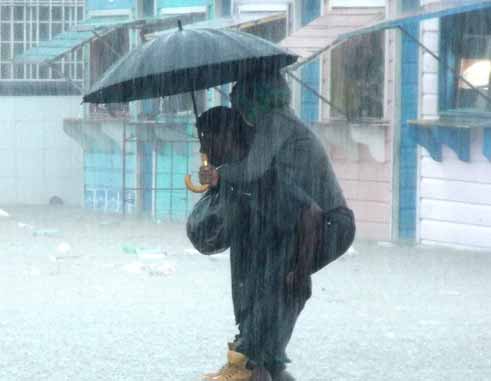 THE torrential rains that swept through the island over the past few days washed away plenty of possessions and infrastructure including a number of houses, livestock and vehicles, but the one thing it did not wash away was the spirit of goodwill.

A common sight during the rains and floods last Friday were scenes of togetherness as locals pulled together to help those trapped by the rapidly rising waters.

Strapping men were seen carrying women and children on their backs from one high point to the next, helping them to avoid trudging through the knee high murky waters of Castries.

With all the stories of unity, benevolence and cooperation, one that stood out was that of 45 year old Carlton Ochilien of Jeremie street who in a bid to save the life of a young pregnant woman on Friday afternoon, was almost killed after he was sucked into a manhole on the upper end of the said street.

Since the incident people across the island have been calling for Ochilien to be nominated for a National Award for heroism.

The VOICE caught up with Ochilien who is tiny in stature but strong in heart and spirit. He was also surprisingly and heart-warmingly modest and grateful.

Still shaken up, battered and bruised, Ochilien spoke of his ordeal saying that since flooding was nothing new to his area, it was customary for individuals like himself to uncover the manholes of upper Jeremie Street to allow the flood waters to recede.

He said that it was shortly after doing so and whilst standing next to the manhole directing traffic, both human and vehicular away from the manhole that he encountered the young woman who in a bid to avoid the knee-high waters of the sidewalks, was walking in the middle of the street.

Ochilien said he warned her to go to either one of the sidewalks as the manhole was not visible and posed danger for her.

He said it was within a split second after turning his attention to another passerby that the young woman disappeared:

“I was about to leave but instinct told me to just stay where I was so I stayed. Then I looked down and I thought, ‘Don’t tell me that the lady went down in the hole’ and that was exactly what happened. By then I said to myself, with all that water pressure coming down, if that’s what has happened then she’s gone…she’s dead. For the time that she’s been down there, nobody will see her again…she’s gone.

“I still didn’t believe that it happened. But at the time, something said to me ‘Carlton, don’t move’ and all of a sudden, I just saw a hand rise up from the hole. I can tell you, that woman herself has a story to tell of how she survived so long after she went down in all that water. When I saw the hand, I shouted for two other people to come and help and I was screaming, ‘Here she is, come help me!’.

“At first the guys didn’t take me seriously, but then when I grabbed her hand she pulled me down. When I went into the hole, I turned around and with all my strength, I pushed her up and that’s when the two guys pulled her out, but the water took me down.”

Ochilien said his recollection of his time underground is vague but all he remembers is that he was looking for air to breathe as he was being swept away.

He said with swimming and diving experience, he was able to hold his breath at times for long enough to survive.

Ochilien said at some point, the water carried him to a culvert and landed him straight onto its dividing point. This, he said, was when he rested for a few minutes, caught his breath and strength and then proceeded to work his way back upstream from where he had drifted downwards, all the while pulling on for his dear life to some unknown object…all of this took place underground.

It wasn’t until he saw an opening on the street that he pushed his hand through and miraculously he was spotted and pulled out.

He said: “Everybody thought I was dead already. I was gone for over two hours, but to me it felt like five to ten minutes. Seriously, all my concerns were for the woman. I was concerned about her and whether she had survived or the water had taken her back down.”

When asked if this kind of bravery was a normal trait of his, Ochilien said simply: “It was just instinct.” He added: “I wouldn’t have wanted her to drown…I wouldn’t watch somebody drown in front of me.”

Ochilien added: “When I walk along the streets, everyone keeps calling me a hero but I’m not a hero. I just did what someone would naturally have done in this situation. If you see somebody drowning before your eyes, instinct would make you move to help that person so I don’t consider myself a hero.”

Ochilien also had a word of praise for his helpers: “I want to say thank you to all the guys who came to look for me. I want to thank them because they were concerned and I never knew that there were people who felt concern for me so I say thank you to them and thank you to the Lord because I’m still here. Everybody says it’s a miracle so give God thanks and praise.”

Whilst this story had a very happy ending, unfortunately it wasn’t so all across the board as later on that same day, father of four, Cletus Estephan lost his life after he was swept away by the raging Bexon River in the process of trying to rescue a cow.

This tragedy has left the nation with a bitter-sweet feeling of both joy and mourning with even the Prime Minister, Dr. Kenny Anthony sending his condolences in the form of a press release.

Dr Anthony also referred to Ochilien;’s brave act. He said: “As much as this death (Estaphan) brings pain, I give thanks too for the heroic efforts of Carlton Ochilien, who saved two persons on Jeremie Street. As soon as more details are available, I would certainly wish to express my thanks and admiration to this young man in person.”