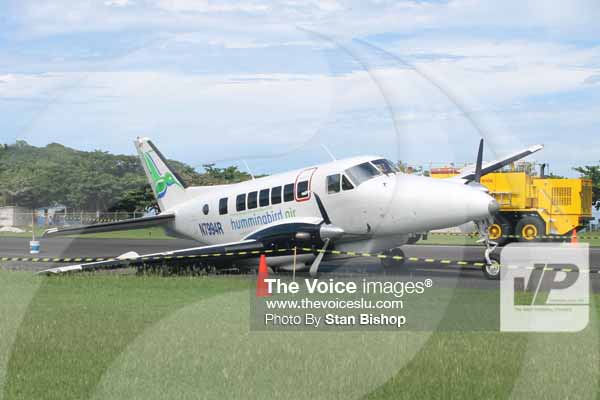 Share this post
FLIGHTS at the George F. L. Charles Airport resumed yesterday morning following the closure of the airport on Sunday after a small aircraft crash landed on the airstrip.

A press release from the Saint Lucia Air and Sea Ports Authority (SLASPA) issued within two hours of the accident said that around 8:46 on Sunday morning the BE99 aircraft of Hummingbird Airlines encountered difficulty while the pilot attempted to land on the airstrip.

As a result, the aircraft – tail number N7994R – veered off the runway towards the southern edge into the grassy area near the fence running adjacent to the SAB Facility.

At the time of the accident, the pilot was said to be the lone occupant on the aircraft and sustained no injuries.

When The VOICE arrived near the scene around 10:30 Sunday morning, the crash scene was cordoned off with black and yellow tape. SLASPA officials were seen on the runway assessing and photographing the aircraft. A unit from the St. Lucia Crash Fire Rescue was also present.

There was also noticeable damage to the aircraft’s right propeller which had become warped, presumably due to the crash landing.

While the airport remained open for the rest of Sunday to serve customers, the runway remained closed while the Eastern Caribbean Civil Aviation Authority (ECCAA) conducted its investigations into the accident.
However, SLASPA issued another press release yesterday confirming that the airport had resumed regular operations on Monday, adding that an all-clear directive had been given by ECCAA to remove the damaged aircraft from the runway.