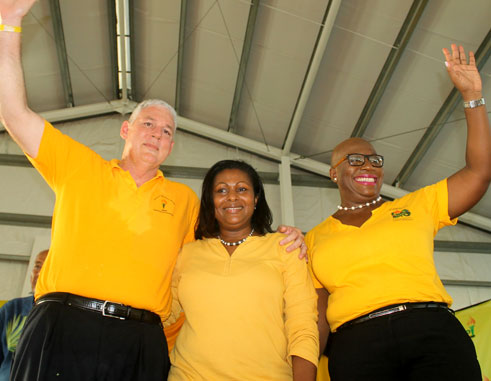 Flood-Beaubrun Pledges To Stay With The UWP.

Chastanet’s latest win adds to his previous consecutive victories over Stephenson King and Dr. Claudius Preville at the party’s previous national conventions in 2013 and 2014. However, his latest win margin – 280 votes to Flood-Beaubrun’s 55 – is already fuelling debate among delegates as to the need for another party convention before the next general elections.

The convention began with a twist this year with delegates beginning to vote from as early as 10 a.m. Just after 1:00 p.m., the main session commenced with the presentation of written reports.

In his address to the delegates, Chastanet chided the current Labour administration which he accused of not doing enough to make life better for Saint Lucians. He said his party plans to revive the economy and improve on the country’s social and infrastructural landscapes should it succeed at the next general elections.

Chastanet also issued a warning to party members who are not united with the party’s cause, calling on them to step aside in the interest of the party. To ensure victory, he said, the party must have a united front.

“Those who do not wish to work with us in the pursuit of this aim, do not place the cause of the Saint Lucian people above their own (and) do not believe that the United Workers Party can achieve this victory, must declare this now or forever hold their peace,” Chastanet told the cheering delegates. “They must do the honourable thing and step aside for this modernized United Workers Party will not be deterred.”

Former Prime Minister of Saint Vincent and the Grenadines was the featured speaker last Sunday. Referencing instances in Canada and England where political leaders tendered their resignations after their parties’ failed bid in general elections, Sir James spoke to one of the issues that has plagued the UWP for years now.

“What’s wrong with us in the Caribbean? We don’t know how to pack up?” Sir James said to a resounding applause from the delegates.

Mary Isaac’s vote of thanks rubbed Stephenson King the wrong way, however, with the latter walking out of the proceedings after Isaac borrowed Sir James’ “pack up” phrase.

“I really like the part about ‘pack up’. And I, too, have a question for you: In what Parliament in the Caribbean or anywhere in the world do you have an ex-Prime Minister sitting as an ordinary parliamentarian?” Isaac said as she began the vote of thanks.

When asked to clarify her “ordinary parliamentarian” jab at King, Isaac told The VOICE that by virtue of King not being either the Prime Minister or Leader of the Opposition, defended her remark.

“What would you call him? An ex-Prime Minister is either Leader of the Opposition or does not exist. You understand what I’m saying? Look at your literature, go and research it. It’s not a mépwis; it is to cause people in the Caribbean to think of the things that they do. This is wrong,” Isaac explained.

Meanwhile, Flood-Beaubrun told the delegates that despite her loss to Chastanet, she remains committed to be of service to the party. In her brief address to delegates, the former two-term SLP parliamentarian said unity and peace are vital if the party is to triumph at the upcoming polls.

“We are united in common purpose,” Flood-Beaubrun said. “Brothers and sisters, what we need to do is to remove the Labour Party from government….That common goal has to be the catalyst for unity.”

During a post-convention press conference held on Sunday night, Chastanet said he was pleased that the delegates remained confident in his leadership and the hard work his team has been able to infuse into the party. He added that Flood-Beaubrun’s future role in the party will be on the agenda at a meeting the executive will hold this week.

“She’s obviously a great talent. I’ve said that from the beginning and I’m very happy that she’s committed herself to the party today. It’s only better for the party and, more importantly, better for the people of Saint Lucia,” Chastanet said.

Among the upcoming plans the party has in the pipeline, Chastanet said, are the setting up of a shadow Cabinet within the next two weeks and launching a party manifesto.

Delegates also gave their assessments of the party’s readiness for the next general elections, with one telling The VOICE that the party should forego the next convention. Stability, he said, is key.

“My feeling is that it wouldn’t be wise to change the executive of the party at this time, knowing that general elections are around the corner,” the delegate from the south said. “The fight isn’t within the party (but) really against the Saint Lucia Labour Party and its policies that are stifling Saint Lucians.”

Another delegate described last Sunday’s convention as “the most important in the fifteen years I’ve been a delegate”. She said the current economic situation has made her “distraught and displeased”. She called for major changes.

“I would like to see changes done on both political sides,” she told The VOICE. “I have grandchildren on the way. So even if it means that I must put pressure on my party, I will.”