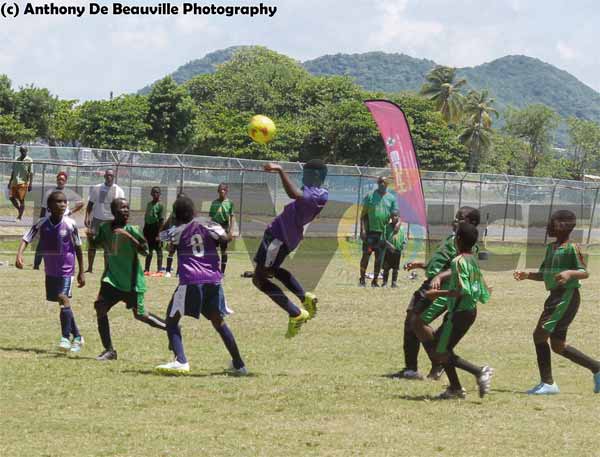 THE seventh annual ECFH / LUCELEC Youth Tournament kicked off on Saturday with a kaleidoscope of colour at the SAB Playing field with an opening ceremony and a march past of a record fifteen clubs.

At the opening ceremony the participating teams were addressed by officials of the Castries Football Council and representatives from the sponsors St. Lucia Electricity Services (LUCELEC) and Eastern Caribbean Financial Holdings (ECFH).

In the first match of the tournament Roseau Valley Under – 13 had a come from behind win over the VSADC winning 4 – 2. VSADC under – 13s led by 2 – 1 at half time thanks to efforts by Keegan Caul and Cagini Pilgrim. Roseau Valley’s first half goal was scored by Dante Fitz.

The second half saw the Roseau team stormed back with three unanswered goals, courtesy of Eric Cadette and a brace by Tori Polius to record the first win of the tournament.

In the second match of the day, an under – 15 encounter there was another second half come back. Boboville raced out to a 3 – 0 half time lead over Ciceron Seagulls thanks to goals from QuanDauphne, Simeon George and DanilleAmrulea. However, after the half time whistle the match changed completely as Ciceron Seagulls moved into an all-out search for goals. They found the nets four times in the half through Kirby Richard, Ishmael Lionel and a brace from Brandon Chandler. Only a late goal from Boboville’s Cyrus Hubert prevent what would have been a remarkable comeback by Seagulls.

The featured match of the day was an under – 19 game between Valley Soccer Academy and FC Pioneers. Despite some patches of resistance from Pioneers the Academy team inflicted a great 8 – 2 thrashing. The half time score was 4 – 1, but the second half saw Pioneers unable to defend their goal and this led to an onslaught of raids by the Academy.

Action in the tournament continues this coming weekend with matches in all age groups at the SAB and the Marchand Grounds.