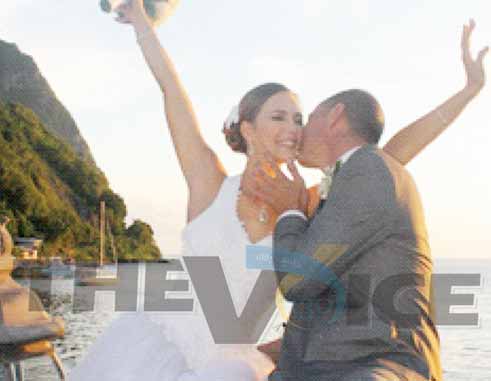 While here, the travel agents, principally from North America and Europe, were treated to an official welcome reception, seminar working sessions featuring six international speakers, a mock and a wedding marketplace, the latter held at the Johnsons Centre in Rodney Bay.

More importantly, the five-day the symposium was held to create greater visibility for Saint Lucia’s increasingly-attractive wedding and honeymoon markets for which the island has won many international accolades over the years.

Director of Tourism, Louis Lewis, told the media that with more than 70% of visitor arrivals to Saint Lucia being for either wedding or honeymoon purposes, the symposium plays a critical role in showcasing what the island has to offer with respect to that niche market.

“The whole idea of putting this symposium on is really to bring all the buyers and suppliers of services together into the destination where they can actually engage and interact with each other to contract for services,” Lewis said. “The thinking behind it is that once you expose the travel planners to the wide range of facilities that are available in Saint Lucia, it allows for a deeper integration and economic benefits beyond what are traditional at their place of stay.”

Lewis said the island’s many attributes – including being a hospitable destination — make it attractive, resulting in Saint Lucia winning the awards for Best Leading Honeymoon or Best Wedding Destination in the world for more than half of the years those awards have been offered.

The Director of Tourism added that a number of marketing initiatives have had to be undertaken in the past few years “to really dig ourselves into that market”. The spin-offs of such efforts include Saint Lucia being featured on ABC network’s “The Bachelor” which, Lewis said, “was not by accident but by design”.

“It’s really about putting ourselves at the forefront because to sustain an advertising campaign for consumers in the market is tremendously expensive,” Lewis explained. “So what we do is to integrate the visibility of Saint Lucia into an existing show that has a demand. It gives us that platform from which we are still benefitting.”

“So we have the policy initiatives on behalf of the government that make it attractive. We have the geography of the country that makes it attractive. We also have the visibility that we’ve created from the marketing perspective to allow us to be strong in that market,” Lewis said.

He said North American travellers tend to have shorter lengths of stay in Saint Lucia, coming here primarily for honeymoons. The U.K. travellers, however, combine their honeymoons with their weddings. The Caribbean market, he said, is a mix of the other two markets.

A major highlight of this year’s symposium was a mock wedding held aboard pirate ship, “The Pearl”, last Saturday in Soufriere. With the picturesque Pitons in the background, scores of travel agents witnessed Helen and Lucas tying the unofficial knot.

According to the Saint Lucia Tourist Board (SLTB), weddings bring in more people, while revenue from honeymoons is significantly less. This is because the wedding entourage is usually larger.

Marcella St. Omer, of House of St. Omer, was one of the 35 local exhibitors manning the 24 booths at the Wedding Marketplace held at the Johnsons Centre. Her crochet wedding dress, she said, has received a great deal of positive feedback since being put on display last Thursday.

St. Omer specializes in crochet and does other clothing items: bathing suits, skirts and bags. Despite participating in the exhibition for the first time this year, she believes the symposium is a great platform for both her talents and her business.

“I see possibilities. It’s just a matter of expanding my network so that I can increase my reach,” St. Omer told The VOICE.