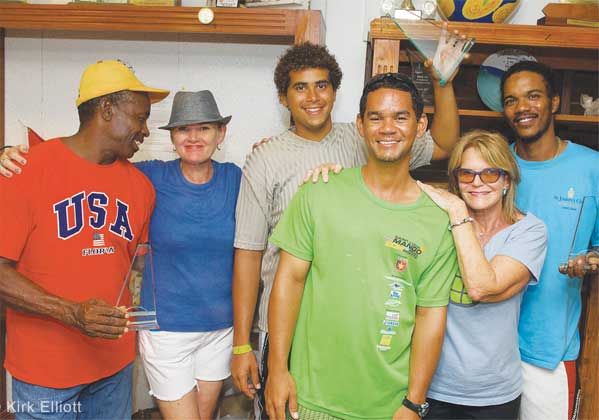 JUDGING by the success of its inaugural event on Saturday, September 19, the Saint Lucia Hobie Cat Challenge is here to stay.

The newest boat race here seeks to bring together the water sports stars of the island to compete for trophies, prizes and a scholarship sponsored by the Barbara Pyle Foundation to encourage individuals in the marine industries to become certified or continue their training in professional sailing.

Hobie Cats are the most popular recreational boats in the tourism industry, which form the most competitive sailing class in the world with an estimated 135,000 in use by an avid base of enthusiasts. In Saint Lucia there are dozens of the 16 foot twin-hulled catamarans, which can be sailed single-handedly with up to three passengers. Despite the challenges of a tight schedule, five resorts sponsored six hobie cat sailors in the inaugural Saint Lucia Hobie Cat Challenge: St James Club Morgan Bay, Cap Maison and Viceroy Sugar Beach brought their hotel cats all the way to Rodney Bay for the race, where they were joined by two veteran independent hobie cat operators from Reduit Beach who represented Calabash Cove and Bay Gardens Beach Resort.

The group of six participants met on Friday, September 18, for a “Skippers’ Brief” with Fredric Sweeney, the Hobie Cat Challenge Race Manager. Up for grabs was a sail training scholarship for the winner and cash prizes for runners up, so the competitive spirit was evident as the younger sailors threw down the gauntlet to the seasoned veterans around the table. Evident also was the appreciation of these tourism professionals who agreed that water sports staff are often overlooked for their contribution to the island’s tourism industry, and that the Saint Lucia Hobie Cat Challenge made them feel their skills and talents were being respected and acknowledged for the first time.

On the water early Saturday it was a beautiful sight as the line of six rainbow-coloured sails on the small catamarans headed into the bay to race in light winds and calm conditions; excitement was at fever pitch on the spectator boat, just returned from a disaster relief mission to Dominica, which was packed with friends, family and supporters. In the Inaugural Saint Lucia Hobie Cat Challenge line up; Dunstan Denis from Cap Maison; Johnny Louis and Kerim Blanchard from St James Club Morgan Bay; Dylan Charles from Viceroy Sugar Beach; Andre Calderon, co-owner of SalunaWatersports, who was sponsored by Bay Gardens Beach Resort; and Leslie Mitchell, owner of Over There Watersports, who was sponsored by Calabash Cove and agreed to enter just minutes before the racing began.

And proving the old adage “better late than never,” it was ‘Calabash Cove’ Leslie who dominated the morning racing, taking first place in races 1 and 2, and being nudged into second in the last race before lunch. From the first horn, the seasoned hobie sailor provided fierce competition for ‘Sugar Beach’ Dylan Charles (19), an experienced dinghy racer who started his sailing career at the National Youth Sailing Programme and has been working at the resort for over a year – he came second, second and first respectively. The rules of regatta racing can be tricky, but despite their inexperience in sailing competitions, the other five sailors picked up the routines and showed a good grasp of the regulations as the day progressed.

After refuelling with an excellent lunch at the Yacht Club, racers and spectators hit the water again in the afternoon for another series of three races. In race 4, the tables turned as ‘St James Club’ Johnny made a play for the top spot, with “Calabash Cove” Leslie sliding into a post-prandial fifth place. By the last race of the day it was a dead heat between the two top placed sailors, and despite a valiant effort from the veteran Hobie Cat operator, race 6 went to “Sugar Beach” Dylan Charles in a close fought finish.

2nd: Leslie Mitchell of “Over There” Watersports representing Calabash Cove, who received a cheque for EC$500.

Once the last horn blew on the racing, the committee boat rafted up to the spectators and an impromptu celebratory party ensued until it was time for a fire-lit beach barbecue and prize-giving at the Yacht Club.

Speaking for the Barbara Pyle Foundation, Sweeney applauded all the participants for sailing their hearts out in what was a spirited competition, while Barbara Pyle thanked the crowd of supporters for cheering, congratulated the participants of the inaugural event on their hobie cat prowess and promised to develop the regatta into a signature sailing date on the Saint Lucian calendar.