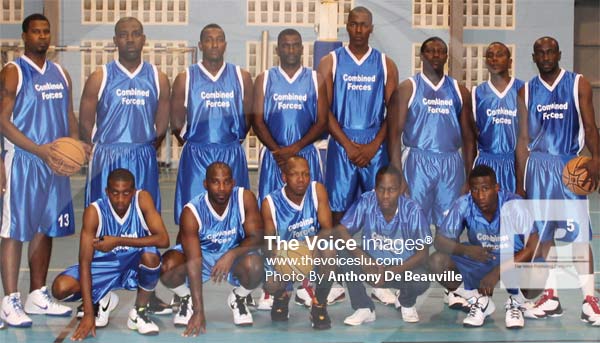 PLAY continues in the South Coast Basketball League today between Black Bay Basketball and No Limit Ballerz, while tomorrow fans will see Vipers against Darren Sammy 88 BBC. Both matches will commence from 6.00 p.m.

The Royal St.Lucia Police Force was able to stave off defeat in the final minutes of a comeback performance by No Limit Ballerz on Thursday evening in Laborie, to begin their winning ways in the League. Final score RSLPF 46 – No Limit Ballerz 44.

The Police squad maintained a variable 5 -10 point lead on the Belle Vue team throughout the second and 3rd quarters with a prime time performance by their skipper CaliousDantes who scored 8 points in the second, following up with another 6 points in the third period. His sharp-shooting comrade, Michael Flavien, assisted with 7 points in the first half, stretching the hapless Belle Vue defence with his poised jumpers beyond the reach of their zone coverage.

No Limit Ballerz seemed able to do little to stop the barrage of attacks by the Police team until the fourth quarter when Dantes was limited to one field goal and his squad to just two field goals total in the period.

Jean-Pierre Frederick, the Belle Vue big man, kept his club alive scoring 8 much needed points in the final push to close the deficit, but poor decision making by his club in the final minute thwarted any chance of a lead change and prevented what would have been a most triumphant comeback.

No Limit Ballerz remains win-less, while the Royal St. Lucia Police Force has their first win in SCBL.