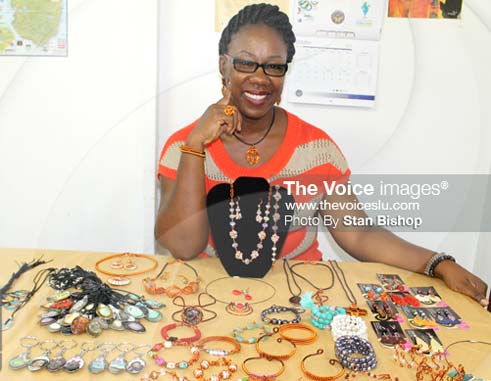 TERRIL Nicholas seems to have a knack for wowing people. Recently, as she was paying a bill at a restaurant, she noticed the cashier staring at the copper earrings, necklace, bracelets and rings she was wearing. Finding it difficult to contain her inquiring mind any longer, the cashier just had to ask: “Where did you get those beautiful pieces from, my lady?”

“I made them myself,” Nicholas replied.

“You made those?” the cashier asked. “I thought they were imported.”

Another incident happened this year as well when one of Nicholas’ friends, upon noticing her fashion jewellery on display at a local shopping mall, exclaimed that “with all the talent Saint Lucia has, people still importing these things.” When he found out from her that she had made the exquisite pieces, he was floored.

Nicholas, 41, of Beausejour, Gros Islet, is no fish out of water when it comes to creativity. The last of eight children, she said she picked up a few creative genes from her mother. For the past nine years, she’s owned and operated her business, Illuminating Designs, which, she tells me, “brings light to whomever wears one of my items.” Her creative journey, though, preceded her business.

“I’ve basically created stuff all my life,” Nicholas said. “Not necessarily for the market but just taking something and turning it into something else.”

Nicholas said she has made jewellery as a side job while holding jobs as a therapist and a supervisor. She did carpentry and joinery at school but always had an inclination to make jewellery.

So nine years ago, she decided to quit her day-to-day job and start her own business and immediately got into the “sink or swim” mentality. She was prepared to take the bull by the horns and face whatever challenges that came her way, she said. Such is the case when one follows a dream, anyway.

“I started out with the basic bead and rope-type stuff. But as the years went by, I did my research and also came up with different ideas. I still go on the Internet, not for designs, but for ways that would assist me in perfecting my craft. Sometimes when I’m asleep, I dream up ideas and have to get up and create my pieces since I’m not one to draw designs,” the fashion jeweller explained.

Nicholas is probably known best for the items she makes from stainless steel spoons. It’s an aspect of her craft she said she basically had to spoon-feed herself. A few spoonfuls of items later have now become key attractions among her many customers. But wait, why a spoon?

“There’s something called a bezel, which has pretty much the shape of a spoon,” Nicholas explained. “Since we don’t have bead shops on the island, I had to improvise. Hence the reason I began using the spoons to make things like key rings, necklaces and things like that.”

Nicholas uses an epoxy to insulate items she adorns the spoons with, items that can range from nuts and bolts to photos to baby teeth.

Nicholas also makes necklaces, rings, bracelets, earrings and other items from enameled copper, embellishing them with beads and other materials. She also makes shambalas, using hex nuts and beads.

So lucrative has Nicholas’ dream job been that she’s been able to remain self-employed for nine years doing what she loves, having no difficulty paying her bills and putting her daughter through secondary school and now college. She credits her hardworking nature and a desire to keep expanding her horizons.

“I can still say that I’ve been successful over the past nine years because a lot of people go out of business after just one year. But I always persevere. I believe that if something is mine, then I don’t have to take a laid-back attitude towards it. I still need to push myself and be determined just as if I were working for someone else,” the fashion jeweller said.

So how does the woman whose eye-catching fashion jewellery feel whenever she sees people wearing her jewellery? “Happy!” she tells me.

“I feel that people actually value my stuff. It’s very comforting when they tell me how much they love my work, especially given the fact of where I came from — the lack, the want, the need – to a place of substance,” Nicholas stated.

As for prices, Nicholas said hers are so ridiculously set that she often thinks she’s giving her items away. She added that she tries her best to set prices that can suit everyone’s pocket. Her items can be purchased from the Black Amigo booth at Baywalk Shopping Mall or from her directly by calling 715 2855 or 287 3717. She is on Facebook as Terril Nicholas, on Instagram as creation_awaits where you can see samples of her works.

She’s also an on-the-go saleswoman who guarantees that she has at least one item you’d want. Besides, she proudly boasts about offering her customers VAT (Very Affordable Treats).

Nicholas is currently preparing to participate in her first exhibition, the Saint Lucia-Taiwan Trade Exhibition, which will be held next month at the Johnsons Centre in Rodney Bay. Despite looking forward to selling many of her items there, she’s also aware that the exhibition will provide much-needed exposure for her business.

“I’m very excited because it’s something that can open another door for me,” Nicholas said.

Her advice to fellow entrepreneurs: “I believe everyone is born with a gift that they just need to tap into. I don’t think they should put it on the backburner for anyone else to do. If you have a gift, feed it just like a tree, and it will grow.”