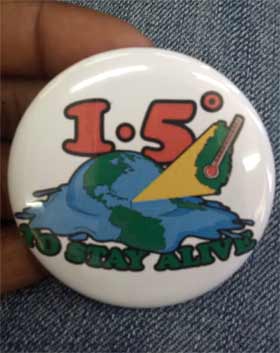 ALMOST every textbook on marketing that I’ve read thus far suggests that sex appeal can sell almost anything. The sad thing about that is that even unscrupulous industrial companies have spent billions of dollars in sexy marketing campaigns pushing products that were manufactured at the detriment of our own survival. One of the saddest ironies in this get-rich-quick-at-any-cost cycle is that governments and lobbyists have their hands in big industries pockets.

At the Conference of Parties (CoP21) to the United Nations Framework Convention on Climate Change (UNFCCC) to be held in Paris this December, member states are expected to sign a legally-binding global agreement that aims to keep temperature increase below 1.5 degrees Celsius above pre-industrial levels by the end of this century.

The key to getting that agreement signed are the voices of thoseSmall Island Developing States (SIDS) that for eons have been making a desperate call for such an agreement to become law. After all, the detrimental effects of climate change can be seen and experienced daily. No scientist needs to swoop in from France or Germany to tell Saint Lucians that the past few weeks – or months – have been hotter than they usually are. Or that the seasons are not sticking to their usual criteria anymore. Or that weather troughs are really eroding our gains.

One of the major priorities for the Caribbean presently is gaining access financing to support our adaptation, mitigation and the plethora of issues associated with climate change. Issues include rising temperatures and sea levels, changing patterns in rainfall, harsher droughts, storms and other natural disasters and ocean acidification that results in fewer fish catches. These are some of the concerns some of those in favour of signing onto the agreement are hoping to resolve.

As Lady Luck would have it, the small island developing states now have a few unexpected allies on their sides. Heavily-industrialized countries such as China, Brazil and India have realized – albeit late — that they cannot remain sustainable if they continue to treat the environment with scant regard just to make a buck. Their people are also feeling the effects to the extent that more people are speaking out and demanding changes.

I first took climate change seriously after learning what the term was back in 1998 when the United States signed onto the Kyoto Protocol adopted in Japan in 1997. But with the U.S. Senate not willing to sign onto any treaty that puts its economic stability in jeopardy – even if it means cleaning up the planet – that treaty was never put to the Senate even though then President Bill Clinton had signed it. In 1990, the United States accounted for 36% of global emissions, so their ratification meant a big deal. Talk about double standards, right?

With the 21st century’s emphasis on a cleaner planet becoming as pervasive as destructive natural disasters, the planet’s future is basically being decided on two key principles in December: on one hand, the capitalists who would want to enrich themselves by any stifling means necessary or, on the other, by those who do have a social conscience to save it.

Back home in Saint Lucia, we know too well what the devastating effects of climate change are. Many of us might not know all the intricacies of the subject but we definitely feel the effects, especially those fishermen whose catches are sparse or those agriculturists who cannot even rescue their tomatoes from the scorching heat these days. Take a walk to the beaches these days and see how fierce and deceptive the tides have become. Or just count the number of days we have to go without rain – even in the rainy season.

Whether we agree on it or not, climate change is a real phenomenon. It’s everywhere we are and goes nowhere if we don’t do what we should to reverse its destructive trend. Despite our smallness in size, our local industries must also make an emphatic statement that they, too, are committed to reducing their emissions. Any amount of harmful emission kept out of the atmosphere could be a life, a dollar or a future saved.

Among those leading the charge in the climate change movement in this part of the world are OECS Director-General, Dr.Didacus Jules, Minister for Sustainable Development, Energy, Science and Technology, Dr. James Fletcher, and poet/playwright/social activist, KendelHippolyte. Through their collective efforts – and that of many more – it seems ripe an opportunity that the region’s voice will be taken seriously this time around at the Paris talks in December.

However, real change doesn’t come by expecting others to do for us what we can assist them to do for the entire collective. That is why every voice is as important as what we stand to lose – or win — in this fight.

Currently, the “1.5tostayalive” campaign to save the planet has been getting considerable support, especially among the youth in whose hands it will be bequeathed eventually. This is a worthwhile movement to get involved with, if only to better understand the subject and know that however small a part you play in spreading the message and keeping it alive is important enough.

While I’m on the subject of climate change, I cannot help but remind us all about the grave problem of garbage disposal that can lead to leaching and acidification of our rivers and other waterways. At some point, we must make an effort to mature and treat nature with the respect it deserves. If you asked me, the planet will keep fighting back as long as we keep fighting it down. And with the large industrialized nations that are on our side in the fight to save the planet, we must do our part to demonstrate that we exert the same seriousness that they do.

Let’s stay alive by making climate change much sexier a subject than big business is.