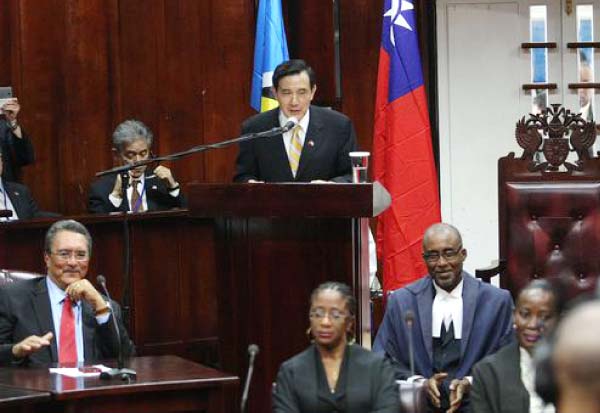 SAINT LUCIA stands to lose a major ally in Southeast Asia as Taiwan’s President Ma Ying-jeou, prepares to make way for another leader following the end of his back to back four-year terms in office next year.

President Ma visited Saint Lucia on August 15, 2013 and signed a joint communique with Prime Minister Dr. Kenny Anthony reaffirming their country’s commitment to closer cooperation in an effort to promote peace, prosperity and human dignity in their respective regions.

He will actually say goodbye to the presidential office sometime in May of next year following presidential elections in January. The elections will be contested between his party, the Kuomintang (KMT) and the opposition Democratic Progressive Party (DPP) whose candidate, Tsai Ing-wen is the odds-on favourite to win the 2016 presidential elections according to the latest polls that put her 20 points ahead of KMT’s current candidate, Hung Hsiu-chu.

During his three day visit to St. Lucia President Ma addressed a special sitting of Parliament, was part of a luncheon hosted by his ambassador to Saint Lucia, James Chang, visited the Union Agricultural Station and participated in a state banquet hosted by Dame Pearlette Louisy at the Sandals Grande.

While it is still too early to determine Saint Lucia’s standing with Taiwan’s next leader, President Ma, in delivering his final National Day address last Saturday called on the leaders of Taiwan’s main political parties to identify with and support Taiwan.

“I am very pleased to see that the leaders of the main political parties are all here for today’s National Day ceremony. I hope that means we all identify with, and support the Republic of China (Taiwan) regardless of political affiliation,” he said.

A strong ally of Saint Lucia, President Ma, during his visit here had reaffirmed Taiwan’s assistance to Saint Lucia’s development programmes, in particular its agriculture and tourism, science and technology and sustainable energy sectors.

He had also pledged his government’s assistance to Saint Lucia’s health care system, its public sector modernization programme, community infrastructure and in the alleviation of poverty.

President Ma also said that his country will also share other aspects of its social, human and economic development experiences with Saint Lucia.

He and Dr. Anthony agreed that their respective countries should pursue an agreement for the promotion of trade, technology transfer and travel.