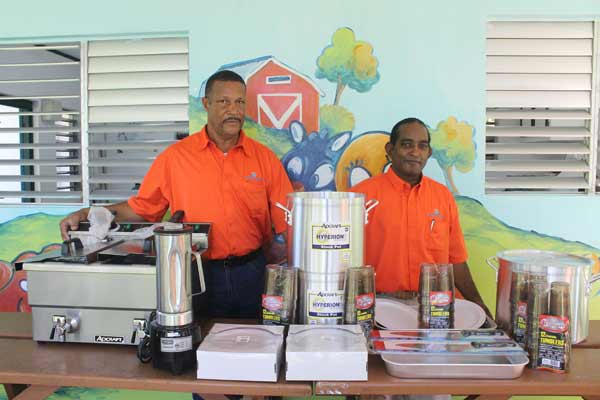 THE Des Barras Primary School’s kitchen can now cook up a storm, thanks in great measure to RJB Hotel Supplies that made a sizeable donation to the school.

RJB Hotel Supplies General Manager, Rick Barnard, said he made the donation after he was informed that the school’s kitchen was very much in need of some cooking utensils.

“We sponsored just about $10,000 in cooking equipment, including a commercial deep fryer, pots and pans, plates, and drinking glasses,” Barnard said.“It was a bit outside our usual sponsorship because we’ve never made such a large single donation before. However, we felt that it was necessary to do so for the school. We believe that the sacrifice we made to make this possible paled in comparison to basic necessities the school required.”

Artist Luigi St. Omer, whose son attends the school, had made a plea to the major appliance and foodservice supplies distributor on behalf of the school. Incidentally, St. Omer was Barnard’s art teacher at St. Mary’s College. Barnard said that given the school’s constraints and his past teacher’s heart being in the right place, he could not turn down the request.

“I believe the items will assist the school in a big way, not just in its school feeding programme but also in enabling them to use the equipment to prepare snacks and so on at their fund-raising events to generate much-needed income for the institution. So we’re very pleased to have participated in that endeavour,” Barnard said.

Meanwhile, the school’s principal, Ezra Joseph, said his school is “overly elated” by RJB Hotel Supplies’ generosity, adding that it is rare that such secluded and small schools receive this kind of assistance. The teachers and students, Joseph said, are already seeing the benefits of the donation.

“The products which you supplied have already been placed in use,” Joseph wrote to Barnard. “We have seen the faces of the cook, parents, staff and, most importantly, students light up when presented with the new items. They had for such a long time grown to look upon the overused and severely outdated utensils and cutlery as something that would not change in a hurry. They hated it but saw no way out. The relief was clear and welcomed.”

The Des Barras Primary School is located in the Babonneau constituency, about 40 minutes’ drive from the Choc Gap. The school currently has 48 students, ranging from Grade 1 through 6.

Over the past few years, RJB Hotel Supplies has given assistance to other schools, especially in the Schools Cook-Off. The company had also provided assistance at last year’s Love Elevated Wedding Symposium, this year’s NRDF/SLHTA Cake Challenge, and with Chef Nina Compton at last year’s Saint Lucia Jazz & Arts Festival where she hosted a culinary demonstration.