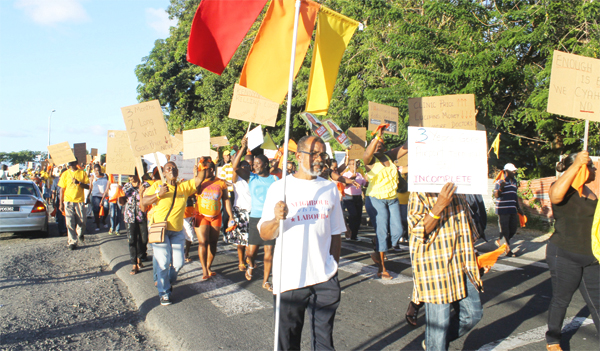 I just want to say how totally impressed I am with Mrs Nancy Charles, the Treasurer of the United Workers Party.

I listened to the Timothy Poleon’s Show yesterday, something which for the most part I refrain from doing now, on account of the host’s increasingly skewed, and much diminished, demeanour. To be sure, the vile ads of the raging, and very scared, SLP help to pay his fat salary, but does he have to make it so obvious!

However, back to Mrs Charles. She is truly able to hold her own, and field all questions and comments with clarity, fluency and seeming ease. She comes across as being open and honest, and not afraid to say what she stands for. At the same time, she displays enormous common sense and maturity in dealing with the issues, and does not shy away from accepting blame where blame is due to her party. An obviously smart, level-headed, courageous woman. She says she is in Mr Chastanet’s corner. I would say he is quite lucky to have her there.

Back to the now high and mighty Timothy We’re hoping that with the expected UWP march coming up on Thursday 22nd, he makes sure to visit his optician, so that he does not just see ‘’dozens of supporters’’ as he saw during the UWP’s last march, where other reporters saw ‘’hundreds of supporters’’ and ‘’over a thousand protestors’’. And, by the way, Mr Poleon, on another note, please desist from serving us Peterkin for breakfast, brunch, lunch, tea, dinner and supper, if you will. Don’t say you have no other ‘’Choice’’ man!