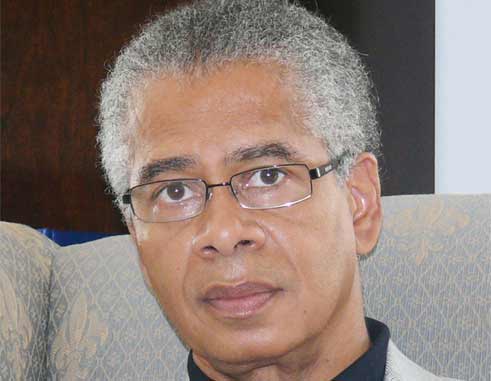 THE UWI Open Campus will on Thursday host a lecture on the dreaded Ebola Virus which in 2014 affected multiple countries in West Africa, in what has been described as the largest outbreak of its kind since its first recorded occurrence in 1976.

Entitled “The Ebola Virus: A Perspective From The Frontline” the lecture will be delivered by esteemed son of the soil and 2014 UWI Open Campus Honorary Graduate, Dr Earl G. Long, at The University of the West Indies Open Campus, Morne Fortune. The lecture will begin promptly at 7:00 p.m.

Dr Long has had extensive personal experience working in the relevant African countries and will be sharing some of his first hand experiences with the audience.

Most of his work has centered on disease outbreak investigations. As recently as April, 2015, the Centre for Disease Control (CDC ) recalled Dr Long from retirement for a two-month deployment to Guinea, West Africa, to introduce a rapid test for the Ebola Virus Disease.

Dr. Long’s presentation will begin with a description of the virus, symptoms of the disease, methods of transmission, and the conditions that lead to its spread. The consequences of neglecting basic health services, control of the disease, involvement of international agencies, and the human cost of the Ebola Virus Disease (EVD) will also be discussed, along with a pictorial visit through Guinea.

Dr Long, graduated from St. Mary’s College then traveled to Canada where he attended the University of Western Ontario, Canada. After graduation, he served as a Teaching Assistant in Parasitology before he was awarded a Rockefeller Foundation scholarship and fellowship to pursue an MSc/PhD programme in Clinical Parasitology at the London School of Hygiene and Tropical Medicine. He completed the programme in three and a half years, and obtained the Diploma of the London School of Hygiene and Tropical Medicine, returning home to St. Lucia for one year to work with the Schistosomiasis Research and Control Laboratories at the Ministry of Health.

The following year, Dr. Long was invited by the University of Texas Medical Branch to join the Postdoctoral Program in the Departments of Pathology and Clinical Microbiology. On completion of the program, he was offered the position of Associate Director of Clinical Microbiology and Assistant Professor of Pathology. He taught at that institution for three years and was then recruited by the Centres of Disease Control (CDC), Atlanta, Georgia. In October, 2014, the University of the West Indies awarded him an Honorary Doctor of Science degree.

For the past 20 years, he has worked in 16 countries in Africa and also in the Middle East, South East Asia, the Caribbean and Central America. Most of his work has centered on disease outbreak investigations, and training in diagnostic techniques for malaria, tuberculosis and HIV/AIDS. His particular interest is in developing or implementing appropriate technologies for underserved countries.

Dr. Long lived in Pretoria, South Africa for two years as Chief, Laboratory Branch, The CDC Global AIDS Programme. He retired from CDC in 2011, but still serves as a consultant for that agency on a short-term basis.

Dr Long serves (or has previously served) as a consultant for the U. S. Agency for International Development, Family Health International, The American Society for Microbiology, The U. S. Department of Agriculture, The World Health Organization (WHO), the Gates Foundation (Innovative Laboratories) and Stop Malaria. He holds memberships in The Royal Society of Hygiene and Tropical Medicine and the American Society of Tropical Medicine and Hygiene.
A prolific writer, Dr Long has published over 40 papers in medical literature, six chapters in medical textbooks, several diagnostic manuals, and in the WHO Reference and Training Module for Malaria. His other publications include: Reptiles and Amphibians of St. Lucia, and three works of fiction: Consolation, “Voices from a Drum”, and “Leaves in a River”.