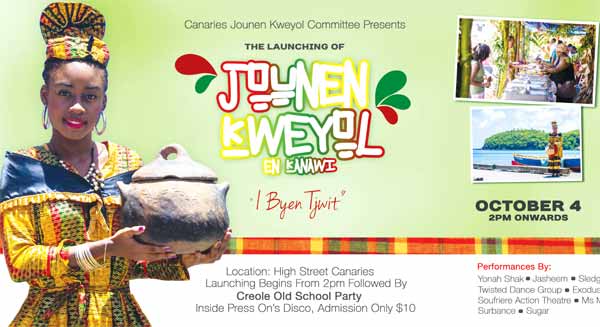 THE community of Canaries is one of the host communities for this year’s Jounen Kwéyòl celebrations.

The launching of the event will take place this coming Sunday in order to create a general awareness and appreciation for all things Creole among members of the community. Jounen Kweyol will be launched in Canaries under the theme “Jounen Kweyol en Kannawi, I Byen Tjwit”

The word kannawi is the name given by the Amerindians for a large cooking clay pot, hence the play on the words “I byen tjwit!”

The launching will be in the form of a mini-show featuring various local acts and artistes as well as a few outside performances such as :Yonashack and Friends, Sledgy, Exodus, Subance and Mighty, Fundamentals Dance Group, Twisted Dance Group and Drama by Shaquille Edmund.

Food tents will also be set up to give the public a taste of what is to come. Creole food such as green figs and saltfish, breadfruit and smoked herring, roast bakes, fishcake, and some local snacks like turnover and coconut cake will be on sale.

The launching is scheduled to begin at 4:00 p.m. and will be followed by a Creole Old School Party.