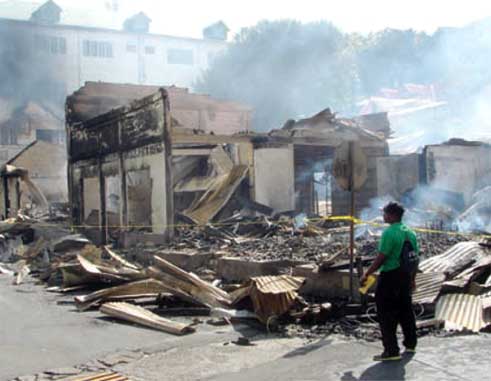 THE town of Soufriere awoke from its slumber minutes before midnight Thursday to the threat of a major fire that tore through Sir Arthur Lewis Street and Upper Bridge Street completely destroying five buildings and leaving six others in a damaged state.

Now the fire department, which appeared on the scene about midnight after being alerted just about two minutes earlier, is investigating, probing to find out what caused the inferno.

“Practically a whole block of the town was affected by the fire,” acting Fire Chief Lambert Charles said yesterday.

“It was a major fire. Our initial assessment says that five of the buildings were completely destroyed while six others were partly damaged,” Charles added.

“We have not yet confirmed whether the buildings that got affected all housed businesses,” Charles said prior to press time.

“However there have been no injuries and no deaths,” he added. However, several families have been rendered homeless.

The inferno which started in the J.Q Supermarket on Sir Arthur Lewis Street, quickly spread to Bridge Street, destroying several homes. Among some of the business houses completely destroyed by the blaze were the J.Q Supermarket, Ultra Mart and a souvenir shop.

The Soufriere Fire Station received the alarm about midnight. It took them several hours to contain the blaze, despite receiving assistance from the Vieux-Fort Fire Station. The officers had to use water from the sea to contain the fire. Townspeople also assisted in containing the fire which had threatened to destroy a large section of the town.

Fire officers of the Soufriere Fire Station say information on the cause of the incident is sketchy at this time. Neither could they give a figure of the number left homeless by the blaze.

John Barnete, a fire victim said the incident has left him in dire straits. He said despite a desperate attempt to save as many of his personal belongings as possible, he was only able to salvage a few clothes.

“I went outside to see the fire, but when I saw the amount of damage it was causing I had to run back inside quickly to try to save some of my things,” Barnette, who was alerted of the fire by a neighbour, said.

According to him, he called a number which he had for the Soufriere Fire Station some years ago, but realized that it was no longer in service. A fire officer who was at the scene at the time, admitted that the number was once in use, but has been changed.

“Had I called the right number, the fire officers would have been on the scene earlier…They need to inform the public when they have changed their numbers,” he said.

Bernadete Nelson, another resident said: “The fire started in the J.Q Supermarket and spread quickly to other buildings in the area… All of a sudden I heard things bursting in the fire…Electrical wires were sparking on electrical poles,” she said.

Minister of Commerce, Emma Hippolyte, who is from Soufriere was on the scene lending support to the victims . She also praised all those who assisted in containing the fire.

She added that despite the loss of property, “we should be thankful to the Lord for saving lives.

“This is unfortunate… However, the Lord gives us, takes it away, and gives us again… We will build from the ashes,” she said.