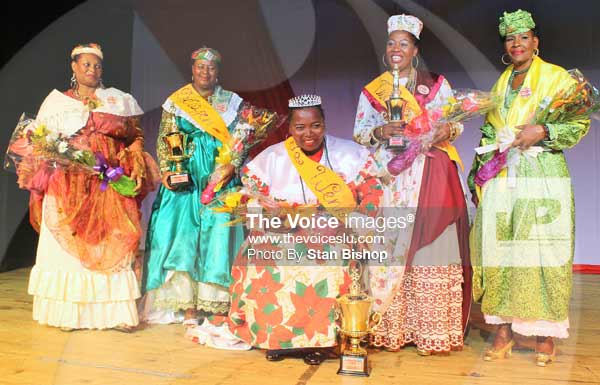 The AnseGer, Desruisseaux resident amassed 652.5 points to win the title in a competition that saw her being consistently articulate and confident.

The talent segment especially was a thriller for the small but appreciative crowd. Contestants dealt with many social aspects of traditional Saint Lucian lifestyles: how to deliver a baby, how Saint Lucians come together following the death of a relative or friend, dancing, and the importance of coconuts and its many uses.

In the pawolgwanmoun (words of wisdom) segment, contestants demonstrated how to make bamboo baskets, “tablet”, akras and bakes, cakes, and roasted breadfruit, roasted sardines and cucumber and avocado salad.

Popo told The VOICE that it was her first bid at the national title. However, she did have an edge in the competition, having won a similar title at the community level just two weeks prior in Ti Rocher. Following that win, she got the opportunity to perform her talents at the Desruisseaux Combined School where, she said, the teachers and students showed much appreciation.

Popo said that through the national pageant she was able to meet new people and build new friendships, especially with her fellow contestants. It was hard work preparing for two pageants, she said, but definitely worth it, including winning both. She has plans to ensure that Saint Lucia’s traditions remain national treasures.

“I want to promote our traditions especially among our young people, some of whom have forgotten about them,” Popo told The VOICE. “So I intend to go to the schools and educate the children about our culture.”

Popo’s long journey to doing just that has already begun. In fact, she also attended JounenKwéyòl activities last Sunday in Ti Rocher and Laborie, joining the FRC team along the way.

The LawennKwéyòl Pageant is an annual feature on the Creole Heritage Month calendar. It is presented by the Folk Research Centre (FRC) and organized by Sean Greaves.