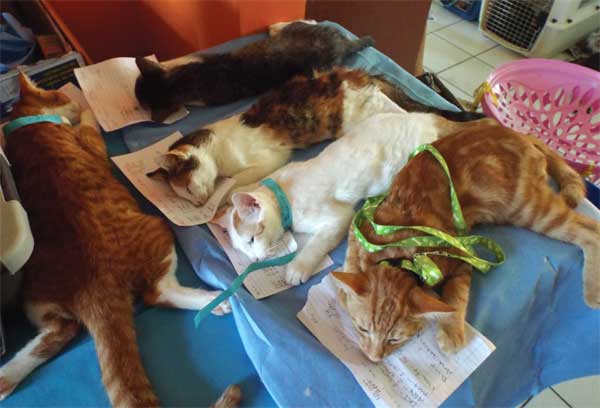 I have written about the problem of stray dogs in St. Lucia in the past but a recent initiative by Taj Weekes has just ignited my passion for the well-being of these animals.

After a kind gesture by his son who bought $80 worth of chicken and bakes to fed to a pack of stray dogs in Gros Islet one Friday night, Weekes decided to take his son’s advice and do something about the growing problem of strays around the island.

I mean, before last week Thursday, I had never even met the guy but through the magic of television and social media, I had always thought of him as a friend because he was always advocating for the rights of children and those suffering from losses after natural disasters etc. After Thursday’s press conference where he introduced members of the media to his new idea to spay and neuter cats and dogs for free, and going the extra mile to round up a team of veterinarians from the U.S., U.K. and Canada to help, I was told that this is an all round good guy..

Taj Weekes and his team set out to spay and neuter 400 dogs and cats. Now as small as that number might sound because after all, there are strays around every corner of the island in their thousands, that’s 400 less animals adding to the population of fast breeding animals…believe it or not, this can actually make a bit of a dent in the huge number of unwanted puppies and kittens that will no doubt end up on the streets either as strays or as “road kill”.

At that same press conference, I happened to meet an angel in the flesh named Charlene Penney who has lost count of the number of stray animals she has picked up off the streets and given them shelter at her house in Soufriere…the last time she checked, the number was climbing towards 30.

I know people who are adamant that animals are not important and so they don’t care whether they are tortured, killed, eaten and are at the receiving end of all the other atrocities that we humans inflict on them. will think that I’m speaking utter nonsense.

What’s worse is that the main animals that suffer at our hands are the ones like dogs and cats…which can be domesticated and look up to us for love and protection as we are at the head of the animal kingdom…although sometimes I wonder because some humans, with the way they treat animals, act like mindless amoebas.

Let’s skip to Sunday past, I went to the old Gros Islet Police station where the snipping was taking place and right then and there, I didn’t see vets. I saw a team of angels, who were covered in dog and cat urine, fur, slobber and then some…they were knee deep in their work but they were doing it out of the goodness of their hearts and they enjoyed it.

Being an animal lover, seeing such a great deed left me feeling emotional and grateful because although I don’t own a pet, these people were helping out the pet population in my home St. Lucia and that means less dogs and cats being run over and less furless, disease ridden, flea and tick infested animals running around being kicked and burnt etc. for fun by people who have no hearts for these creatures.

I am hoping that this movement will cause a chain reaction of good deeds for our local animals. If a bunch of strangers can leave their homes…heck their countries and come here to treat our animals like God’s beautiful creatures, why can’t we adopt the same attitude and be more compassionate and caring?

I don’t think that I need to tell anyone, pet owner or not that it is not all right to kick, maim, injure or kill defenseless animals. If something is not beeping in your heads to alert you that this is wrong and you have a problem with what I’m saying then it’s clear that you are part of the problem.

We need to start taking this more seriously and treat our animals better.

I can’t wait for the day when someone from the government, any government decides that this is truly an area in need of funding and that perhaps a nice and safe little animal shelter or funding to the St. Lucia Animal Protection Society (S.L.A.P.S.) could actually go a long way of alleviating this problem.