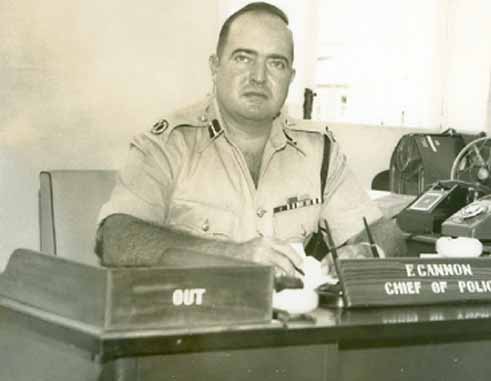 A BRITISH Guiana law enforcer who headed the St. Lucia Police Force for five years and is widely regarded as the toughest and best “Chief” the Force has ever had has passed away at the age of 87.

Frederick Cannon, who joined the then British Guiana Police Force in 1949 as an Assistant Superintendent, was already regarded as the most feared police officer in the South American country, according to Guiana Graphic newspaper, when he came to St Lucia in January of 1962.

His recruitment to head the St Lucia Police Force followed a period of unrest in the Force that resulted in the appointment of two Commissions of Inquiry. As a result, disciplinary action was taken against some of the ring leaders and others were called upon to retire.

The unrest began after policemen began expressing dissatisfaction with the way the Force was being run under the leadership of an Englishman David Douglas McGoun. The feeling was that St Lucian policemen were being overlooked in promotions and were not being fairly treated. It was a time of political turmoil in St. Lucia precipitated by the breaking away of certain key members of the St Lucia Labour Party government

Under pressure, McGoun fell ill and had to be hospitalized. A public protest demonstration by policemen on September 11, 1961 was called off only after Wilfred Farmer, who had previously led the Force returned to St Lucia and was able to convince the protesting policemen that public protest was not in their best interest. Later that month the first inquiry was held at was concluded in October.

When McGoun resumed duties in early November after sick leave, the local policemen refused to work under his leadership. Tension mounted with policemen reporting sick, office keys disappearing and the Police Force’s vital telecommunications system sabotaged. On November 4, 1961 McGoun was sent on leave.

This was the situation that Cannon stepped into when he arrived here on the first working day of 1962. Under his leadership morale and normalcy were quickly returned to the Force and he remained chief for five years until the island attained Associated Statehood in 1967.

Apart from being Police Chief, Cannon held several other positions including Chairman of the Film Censors Board, Fire Chief, the ADC to the administrator, head of Immigration, head of the Red Cross, and a few other service organizations.

Cannon’s daughter, Judy told THE VOICE : “Most important he instilled in the St Lucia police service a great sense of pride and dignity, and all of his men had confidence in him and knew that he had their backs if they did their jobs well. He was also highly decorated both for bravery and for service from his years in Guyana through to St Lucia”.

Cannon was also an excellent marksman in the Colonial Police Service, and shot competitively for years.

Cannon left St. Lucia after the midnight ceremony of Statehood, March 1, 1967, along with Mr. Gerald Bryan, the last Administrator of St. Lucia, on board the symbolically departing British warship.

At a farewell function held in his honour earlier, Cannon paid tribute to the Force he had left behind after 62 months praising the men for their loyalty, devotion to duty, cooperation and hard work.

Admitting that his heart was heavy for his departure from police work was “a great wrench” in his life, Cannon used the occasion to address what he said then was “a subject which is of great importance to us in this area at the present time”.

He said in his opinion there had been no time in history when the stabilizing influences of the world, including law enforcement bodies, “have been tested as they are today”.

Instead of the dream of one world and world government, he said, there were in increasing numbers, “groups of people—new nations, cutting away the ties and former associations, and striking out on their own in an effort to be masters of their own destinies.”

Cannon added: “Such transitions are not easily made. When the status quo is changed it is not done without resentment. Ancient loyalties are affronted and opposition results. Emotions run high and bitterness takes many forms. We have seen a variety of results of such situations all over the world. One common denominator is almost always present—little people get hurt.

“Eventually, a cry goes up for peace and stability—those two lovely words in the ears of any policeman—and in due course it is the policeman who is called upon to restore peace and stability on the streets of the village, the town, the city and the nation.

“We here today know from our collective experience that the civil police do and will face a daily challenge to their authority, their integrity, their loyalty, their courage and their efficiency. In one country the challenge may come from criminals; in another from subversion or terror, or both, and yet in another from corruption in high places. Combinations of any of these may and do occur.

“It has been said many times that the police are the first line of defence in a country. I believe this and I believe that this first line of defence is being challenged, tested and probed for its weak spot, not only by criminal elements from within our respective countries, but in some less fortunate territories, by force from outside the country.

“It is no accident that the textbooks of subversion give a high priority to eliminating or absorbing the police force. Such a result may be achieved, they teach, not only by force, but by disaffection, corruption and the creation of public antipathy to law and order.

“In order to combat such a situation, government should provide the best conditions possible for our Police Force and thereby create an esprit de corps of the highest order.

“We must live up to our name of being a force that does our job with fear, favour, affection or ill-will. We must have as our watchwords: integrity, loyalty and discipline. Above all, we must have a sense of humour and we must ensure that the public we serve will respect us at all times for what we are—guardians of the peace”.