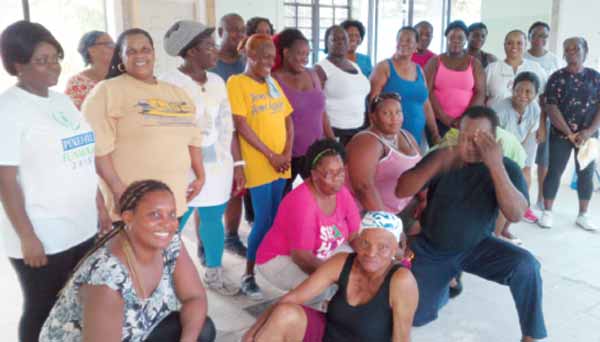 THE competition to lose weight called “Pedi Gwes Sent Lisi” is on and those who are involved are taking it seriously.

Those ladies are under the tutelage of London based Saint Lucian, Timmy Francis who is taking them through the exercises that would make them lose the weight they want to shed and put them in peak physical condition.

Francis, an 8th Dan Black Belt in martial arts, is also a coach in that discipline. According to him at the end of the competition the women under his care will be stronger and fitter.

Francis has a fitness programme for women that he calls FitDefence, which he first started in Anse La Raye. His FitDefence programme is aired on the Daher Broadcasting System Monday – Friday at 5:50 a.m. and 6:15 p.m.

The “pediGwes” competition also called the “Bon SantepouLavi” competition is the brainchild of the Ministry of Health.

According to Francis, the only way he could help Saint Lucian women is to assist them from becoming obese while at the same time showing them how to defend themselves against attackers.