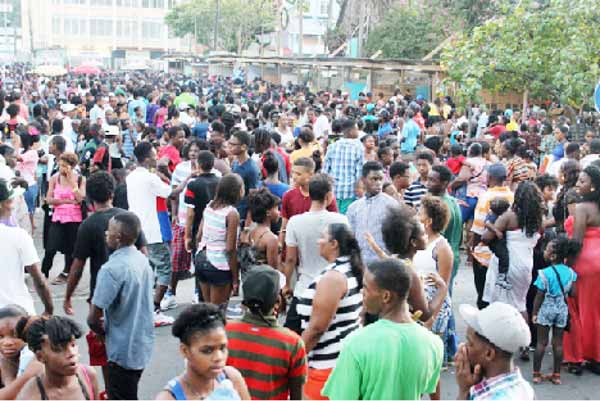 WHILE the St. Lucia Labour Party spends sizeable amounts of money generating silly advertisements of puppetry and Sesame Street –like characters to tear down political opponents like Allen Chastanet, somebody needs to inform them that an unimpressed constituent of young people is looking on, just shaking their heads (smh).

These young people just joining the voting pool are schooled, bright and analytical thinkers who have felt a deep sense of vulnerability, detachment and contempt throughout the leadership of the Saint Lucia Labour Party because although they form the greater part of the unemployed in this country, the Prime Minister has chosen to ignore that and is so detached from this pressing problem that he glibly admitted he does not even know of the latest standing of unemployment in Saint Lucia.

They do not feel any sense of die–hard loyalty or obligation to any party because these youthful thinkers believe in performance and standing up for their best interests. They do not hero worship any politician because of the position of authority he or she holds but because of the calibre of man or woman they prove themselves to be, demonstrated by their integrity in delivering their campaign promises to the people in a manner which convinces them that their representatives are genuinely servants of the people.

Before 2011 the SLP was in opposition and they ought to have had more time on their hands to undertake a more comprehensive appreciation of how the Saint Lucian mindset towards politicians and partisan politics has drastically evolved due to the fact that now, they are dealing with a better educated citizenry who observe them with different naked eyes– not red tainted eyes as perhaps their parents and grandparents did. Instead, Kenny Anthony and his party honchos were busy pretending that they had created an “App” to fix everything – by all accounts however, that super “app” never worked for the youth or the country on the whole.

The national census speaks to a very youthful demographic comprising over 60 percent of the island’s population. As voters these newest entrants into the electorate, five years or less, are heavily influenced by a higher level of political professionalism, intellectualism and interaction than what exists here because they watch a lot of American cable TV news and that is where their biggest eye–openers come from. The level and type of politicking already established in Saint Lucia over the years and which has been perpetuated since Independence is now mediocre and ridiculous in the minds of those post-Independence babies.

They will not be swayed by the same old tactics of character assassinations and theatrics anymore. For all the political parties who want to be taken seriously by young people please take sober notice. Therefore campaign funds should be utilized differently than the last election in 2011 if the youth is to be impressed with any party vying for power and leadership of this country. If the parties fail on that front, then very soon coalition governments will be the next resort because no one party will emerge with a dominating mandate from the electorate.

Just as an example, it can be pointed out that this new and emerging demographic represent a sub–set of the youth who recently took the administration of the Sir Arthur Lewis Community College, to task demanding that they get their money’s worth on their educational investment within the institution. They organized, they galvanized, they engaged the media, and they protested and spoke in sensible, mature and rational terms which made the community sit up and pay attention to their issues. These are young people who scrutinize and (respectfully) challenge authority once the authority is failing to keep up their end of the bargain as leaders and stewards of this nation. They are not fearful of calling a spade a spade while demanding answers and solutions.

The new electorate has made it clear that they want debates and more citizen engagement amongst politicians before decisions with peculiar implications for the people are concluded. They want officials to be far more accountable than they think they are now. They want to see politicians who are accustomed of the tug and pull politics come together to debate the real issues and publicly take a second look at their game plan – this game plan often called a manifesto–strategies and policies for nation building. They want to really understand how the politicians hope to achieve their promises, and at what costs to the people of this country, what are the tradeoffs and what are the gains for the people. What are the figures and statistics they are working with? Surely a Prime Minister who calls a press conference to crow about his accomplishments but forgets about the sufferings of the people, only ends up degrading the unemployed. This egregious level of nonchalance is unacceptable to this crop of youthful observers and voters in waiting.

Not surprisingly no politician in the main parties has come forward and embraced this initiative. Some say they welcome it but it should not be legislated, however no verbal commitment has been made that they will take up the history making mantle to go head to head against their opponents on the same stage. They still want to speak only from the pulpits of their political platforms. The political meeting rhetoric is not going to cut it; the crafty ads and the image smearing campaigns will not cut it. Politics has been a side show in this country for too long now and the citizenry has had enough.

This is why the recommendations contained in the Constitutional Review Commission’s Report recommend such major and radical changes to the body politic of St. Lucia. It is a signal to the politicians that the people are sick and tired of the way they do business running this country. Kenny and company must wheel and come again.

The “I have an app to fix everything” decoy will not convince the technology age young people out there, that such claims are truthful. They are enlightened; they will see right through the usual superficial verbiage. Instead they want to hear from politicians who are honest enough to admit to setbacks and failures. Too many politicians pose as supermen and supergals, beating their chests at every opportunity, while persons who were hungry in 2011 are starving to death now because their lives have simply not gotten any better under the SLP administration. The emerging voters want transparency, they want representatives who induce more interest in government and create knowledge when they speak, rather than increasing and re–arranging the ignorance of the people.

These are among the expectations of voters coming to the next general elections. The people of Saint Lucia have for years been insisting that politicians ought to prove their mettle through the process of debates and analysis of the issues. Why are they avoiding a free platform to build awareness of their ideologies, to boast of their accomplishments? Are they not the decision makers who were either elected or selected to hold public office or the wannabees to come?

If we watch the U.S. Presidential debates and feel infectiously electrified and enlightened about a process that is not like ours, then why are Saint Lucian politicians depriving their own people of the opportunity to hear from them via this forum? One wonders why the Kenny Anthony administration is afraid of the debate ring.