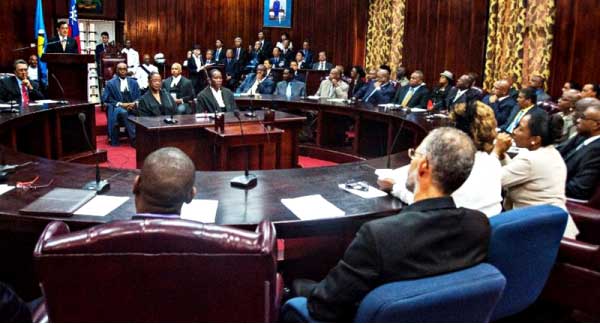 AT some future point the people of Saint Lucia will come to terms with themselves as a nation; their smallness of size, their insecurity, their dependence, and above all, their fears. Hopefully, they will learn to appreciate their place in the world; to identify true grit and character, and to examine dispassionately what keeps them grounded in poverty and ignorance. Such introspection may lead to the choice of constitution they wish to be governed by, and how they choose and replace their government and elected officials, at the national, town and village level.

At the dawn of independence some forty years ago, a constitution was cobbled by the former colonial power, with token local participation. Voices warned against the shortcomings of the new constitution and offered ideas to improve it. These ideas were not accepted and so the new ‘independence’ constitution did not break any new ground. It was not the transformative document which the more far-minded persons would have liked. For example, a provision for proportional representation which, many believed would more accurately reflect the wishes of the electorate and, the composition of an elected national assembly was denied.

Thirty-six years later, power still rests in the hands of a majority which can be elected with fewer electoral votes than its opponents. Worse, the process as practised preserves the dictatorship of a Prime Minister over an electorate who may have voted to see him gone.

A Prime Minister can determine that the constitution ought to be reviewed. He offers no clear and cogent reasons for so wanting but, his majority guarantees passage in parliament. The ayes blindly ‘having it’ should have been the first red flag for those who seek genuine change.

In the present scenario, it’s important to recall that that prime minister returned to local politics with two credentials, only. He had saved his bacon by running away (twice) when trouble brewed in his Labour Government, (1979-1982), wherein he was twice sworn in as Minister for Education. He later returned as a lawyer whose claim to fame was lecturing Law at UWI. Curiously, many believed that he was never tested in a court of law arguing a case before a brilliant and impartial judge. Be that as it may Saint Lucians had a right to expect more from an acclaimed constitutional lawyer – a returning prodigal, in search of power and fame!

Parliament set up a Constitutional Review Committee with prominent jurist Justice Suzie d’Auvergne as chair. After wide and comprehensive consultations, the committee presented its report which was promptly set aside, gathering seven to eight years of dust. The government finally tabled the report in Parliament after much public anger at the delay.

In the debate which followed the public seemed anxious to hear what its acclaimed constitutional lawyer had to say. Alas, he described the entire report as otiose, meaning foolishness – of no useful purpose! To my mind, only a cheap ‘bounce-and-draw’ lawyer would use ‘otiose’ to describe the work of a highly rated colleague, (and her committee). An astute leader is never content to criticize without pointing to a better path – a superior way of doing things. I could think of no other comparison than the ‘bounce-and-draw’ Joe Blow, who has no interest in long term creative work, but instead demands short-term jobs expecting prompt payment on completion. ‘A bounce-and-draw’ Joe Blow has no use for a strategy of seeking long-term employment and a vision of a better home and community. Disappointingly, the Joe Blows now infest all strata of society, even parliament.

The debate was revealing. It indicated that politicians have no interest in constitutional change which would erode their personal advantages, or the excessive powers of Prime Minister. The hateful acrimonious manner in which certain Members of Parliament (MP’s) savaged the report, (including the prime minister’s ‘otiose’ statement) was disturbing. The mood spoke more to the character of those parliamentarians. It laid bare the real problems which the electorate faces at first-past-the-post elections. Saint Lucia deserves better!

Such an important debate ought to have been tackled in a more sanguine manner sensing its historic significance. This was supposed to be a civilized discussion, not a quarrel between a colonized people seeking political independence from a recalcitrant metropolis. The current debate called for a heightened sense of vision and philosophical adroitness. It was a time to say something sensible and profound; to point a constitutional way out of persistent poverty and dependence, and to chart a path to greater empowerment of the people. Sadly, abusive and insulting rhetoric took precedence at a time when the nation yearned for better. It must have been hurtful to those commissioners who may have been watching and listening.

To have engaged in such a Sisyphean and caustic discussion at such a momentous occasion seemed the work of men who had been relieved of their senses. One was forced to ponder whether these outbursts were the childish tantrums or, the remnants of suppressed hostility, from the opposition’s bitter campaign on the road to independence. Had the ghosts of former opposition politicians returned to haunt those who had been poisoned by the animosity of their former leaders? In any event, is it healthy to be so angry for so long?

Perhaps it was a mistake to expect those who had so well imbibed the bad blood of the past, to have completely jettisoned their tattered baggage and negative mind set. The present clearly demands a new national consensus for a new constitution. But it may take a new set of people with less hatred and more love in their hearts to accomplish such a task. Then again, perhaps too much was expected from the d’Auvergne report.

There was something sinister about the way a spirit of evil was infused into the debate by persons who should have tackled the matter with more intellectual rigour. How else to explain the behaviour of ‘honourable’ people who had all sworn to render faithful and impartially service to those who elected them to parliament. Wouldn’t it have been better, having found the report falling short of expectations, to have saved the better parts and then prescribed further consultations on specific points while constructing a better, more empowering and far reaching document?

Regardless of the pressures of an avaricious and thankless constituency, parliamentarians must learn to rise, and to assume a more sanguine, optimistic and confident tone, when a moment in history such as a discussion on a new constitution, presents itself. The long view over the horizon must always take precedence over personal idiosyncrasies and the peeves of those sworn to serve.

If one were forced to particularize on proposals for a new constitution, the first advice would be, ‘never destroy a gate if you do not know why it was built.’ And if something has stood the test of time be very careful how and when you change it. There is no place for malice or ill will in the creation of a new constitution for any country. Constitutional change must serve the general good. It must further empower the electorate (the people) even as it erodes the power of the individual or a handful of individuals. It must look more closely at an upgraded form of proportional representation, and choose empowering the people at every turn.

Term limits on a Prime Minister’s stay in office is another matter needing close attention. No Prime Minister must be allowed to serve for more than two five-year terms. He should also serve a total of 15 years in parliament. That idea was rejected in 1977, because some people preferred to focus on the good of the then long-serving-leader. Such a view was not balanced by the fact that no one could predict how power might act upon the mind of a useless (otiose) leader who loves power for its own sake. History has taught that power corrupts and that leaders will overstay their welcome and corrupt noble institutions in their bid to retain office. Only a sensible constitution (like that of the US, governing the presidency and his election) can save such politicians from themselves.

Another idea for improvement may be a single chamber in place of a Senate, and an elected House. The increasing cost of parliament is an important consideration. There ought also to be a debate on who (and what), should represent the people and whether it should be compulsory for such representatives to live among the people – the constituency – should they become a Minister of the Government.

A new constitution for Saint Lucia must look beyond narrow little minds. It must set new provisions to allow for a wider debate on crucial life and death issues which may also impact its Caribbean neighbours. It may therefore be time for a constitution which envisions the embrace of an elected parliament of the OECS. Later, the inclusion of Barbados and the rest of the southern Caribbean may be considered. An aggressive push towards a more visionary and united Caribbean ought to be provided for in a new Saint Lucia constitution. How else to discuss a CCJ without this broader vision and outreach of a new constitution?

Those who are tired of the divide–and-rule politics must cast aside the petty acrimony and inferiority complexes and instead summon up the courage to break free from the colonial mindset. A new vision must reject the ‘bounce-and-draw’ mentality of a Joe Blow. Saint Lucia needs to find its constitutional voice through its Nobel Laureates – a rallying call for unity, work and progress – of one people and one Caribbean.