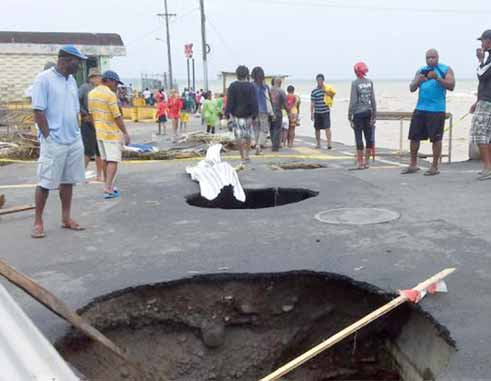 4 killed and Many Missing.

SISTER island Dominica was been dealt some severe body blows with the passage of Tropical Storm Erika which visited the island Thursday leaving death, several persons missing and damage to important infrastructure.

No figure has yet been put on the damages and Prime Minister Roosevelt Skerrit has said that the immediate focus of the government is on search and rescue efforts in the Petite Savanne area where there have been reports of numerous landslides and several persons hurt and missing.

Prime Minister, Roosevelt Skerrit has travelled to Petite Savanne for an on-the-spot assessment of the situation in that community where it is reported that a number of persons are missing.

The Prime Minister who has visited the community said the coast guard unit was trying to access the area by sea since the area was inaccessible by vehicles up to that point.

Skerrit said every resident of Petite Savanne needs to be accounted for.

The Associated Press reported that streets across Dominica turned into fast-flowing rivers that swept up cars as Tropical Storm Erika pummelled the island, unleashing landslides and killing at least four people.

Dominica News Online reported that the bodies of an elderly man and his two granddaughters from Good Hope who also went missing on Thursday, were recovered near the bus stop in the village.

Others reported missing include two brothers from the Bath Estate area who it is said were swept away by the river, another following a landslide in Castle Bruce.

A recently retired police officer and his wife were seriously injured when their residence which is located at Castle Comfort, was damaged by a landslide.

Said the news service: “It’s a sad day for Dominica as the country grapples with the loss of life, injury and infrastructural damage inflicted by torrential rain from Tropical Storm Erika which pounded the island on Thursday”.

Video footage of the disaster seen by THE VOICE showed vehicles being driven down rivers by raging waters and buildings collapsing after their foundations were undermined by gushing water. A lot of landslides and fallen rocks were reported under the Canefield cliff, the Auto Trade area experienced severe floods and a number of vehicles on the compound of the business place were under water.

The Roseau River overflowed its banks causing major flooding in the City and a significant portion of the building housing the Berean Christian Academy which is located opposite the river, was washed away.

The two major telecommunications companies on the island both reported that they were working feverishly to restore service to affected areas and so was DOMLEC as a significant section of the island was without electricity for most of the day.

An elderly blind man and two children were killed when a mudslide crashed into their home in the southeast of the island, said Police Superintendent Daniel Carbon. Another man was found dead near his home in the capital of Roseau after a mudslide, but the cause of death could not be immediately determined, Carbon told The Associated Press.

Police said another 20 people have been reported missing.

Erika was expected to move near Puerto Rico and the Virgin Islands on Thursday and be near or just north of the Dominican Republic on Friday as it heads toward Florida early next week, possibly as a hurricane.

As the storm entered the Caribbean, it did the heaviest damage to Dominica, an island of about 72,000 people of lush forests and steep terrain. Authorities were still conducting a full damage assessment after rivers surged over their banks and walls of mud surged into homes.

About 80 percent of the island was without electricity, and water supply was cut off, authorities said. Trees and light poles were strewn across streets as water rushed over parked cars and ripped the scaffolding off some buildings. The main airport was closed due to flooding, with water rushing over at least one small plane.

The main river that cuts through the capital overflowed its banks and surging water crashed into the principal bridge that leads into Roseau.

“The capital city is a wreck,” policewoman Teesha Alfred said. “It is a sight to behold. It’s a disaster.”

Erika was likely to hit the island of Hispaniola, which is shared by Haiti and the Dominican Republic, said chief forecaster James Franklin at the National Hurricane Center.

“That would certainly not be good news for Hispaniola,” he said. “They’re very vulnerable to flooding. And even if Erika is a weak system that could be very bad there.”

Officials shuttered schools, government offices and businesses across the region and warned of flash flooding because of dry conditions caused by the worst drought to hit the Caribbean in recent years. Authorities warned that power and water service might be temporarily cut off.

“We’re happy given the dry conditions, but it does highlight the need to be on alert,” he said, adding that heavy downpours could lead to flash floods. He activated the National Guard as a precaution.