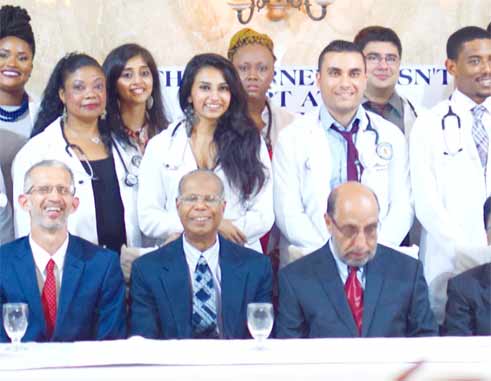 These words aptly describe the speeches delivered by pathologist Dr. Stephen King, and Dr. Leonard Surage, Chairman of the Caribbean Association of Medical Councils, to the outgoing fifth trimester students of Spartan Health Sciences University School of Medicine, at a ceremony held last Saturday, at Royal by Rex Resorts.

The 23 students have recently completed their Basic Sciences programme at the university and are now preparing to do their clinical rotation in countries of their choice.

In his address, guest speaker, Dr. King offered the students words of advice and encouragement, and highlighted some of his personal experiences as pathologist.

“Medicine is a vocation, it is a calling…”, he told the students.

He said medicine can do a lot for doctors, adding that it can take them anywhere, but they must be humble.

Dr. King however, warned them that any slip-ups they make would haunt them.

“When you lie down in your last minute, you want to know that you have been living a life that was worthwhile and left the earth a better place,” he said.

He reminded them that their task was a hard one and when they became doctors they would find it out for themselves.

Dr. King said when he decided to branch off into pathology, many people found it strange. But according to him, the profession has taught him a lot and he has not regretted the move.

“Pathology has been great to me. It has taught me things that I would have not known or achieved. As doctors you fight diseases, but as a pathologist, you are able to see the disease. It is such a powerful thing to be able to look at it and name it. Pathology is an exceedingly powerful discipline in my view,” he explained.

According to him, while practising the profession, he feels the pain some people go through after losing a friend or family member.

“I see a lot of trauma….and I ask myself why would my people be killing themselves?”, Dr. King asked.

He said it was because of this experience he decided to get into the anti violence campaign.

“When a mother is completely broken-down because the person she loves the most has brutally been taken away from her, there is nothing you can do to make her feel better,” he lamented.

Dr.Surage, in his keynote address, highlighted the importance of doctors exhibiting a caring, sincere and emphatic attitude.

“Bedside, manners is not everything, but it is very important. Patients feel comfortable with a doctor they trust,” he said.

According to Dr.Surage, a good doctor is one who is willing to listen and take the time to respond to questions. Listening requires more discipline than talking, he said.

“If a patient feels he or she is being cared for by the right doctor who has taken an interest in his or her well-being, the body will suppress the awareness of the pain and they will experience a faster recovery. And conversely, the stress of having a bad doctor, who does not show an interest in patients, can actually prolong the patient’s suffering,” Dr.Surage explained.

He urged the students to be less competitive and more collaborative during their studies.

“In your pursuit of knowledge, your objective should not be to undo anyone, but to undo the syllabus. Do not be selfish with knowledge. By sharing knowledge you discover your misconceptions and are able to correct them,” he said.

ArnelleAnius, an outgoing student also offered her classmates words of advice and encouragement.

“Do not focus on the minor things like getting the “doctor’s” title before your name. Focus on making an important or positive change…”, she said.

The students were also rewarded for their excellent performances in their exams, the roles they played in the students’ bodies at the school and the school’s various activities.