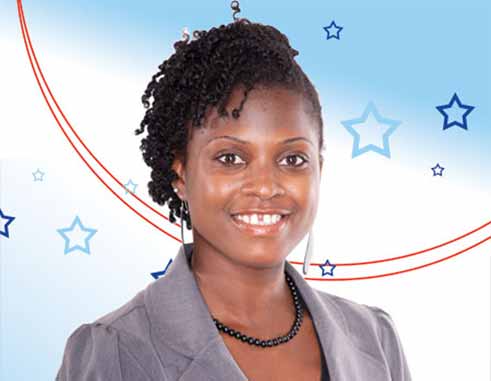 In the space of a few days, the chain reaction stemming from the protest of one Digicel customer has gained enough traction to cause a snowball effect as hundreds step up to show their support and join the protest.

Jadia Jn Pierre-Emmanuel has been causing quite a stir much to the delight of hundreds of disgruntled Digicel customers after an attempted WhatsApp call to her daughter who is vacationing off island was blocked by the service provider.

Jn Pierre-Emmanuel who is the Press Secretary to the island’s Prime Minister has admitted that she was not a frequent user of the application’s calling feature. However, circumstances led her to use it on Saturday. Prior to that day, she had no knowledge that this had been an ongoing issue for many Digicel customers.

Jn Pierre-Emmanuel said that as a post paid customer with a monthly plan of $500.00, barriers of this sort was the last thing that she ever expected. However, the message sent to her by the service provider stated: “Couldn’t place call because your phone’s cellular network prevents WhatsApp calls. Try connecting to Wi-Fi and call again.”

This of course did not sit well with her. She said: “This is something to cause any customer to become irate. Imagine having a postpaid account with a credit limit of $500.00. There you are paying for something. Yet the provider wants to control how you use it? How unreasonable?!”

With a Facebook account consisting of 5000 friends and an additional 839 followers, Jn Pierre-Emmanuel sounded the alarm online and soon learnt that she was not the only one facing the same issue and that in fact, her cries had opened up a floodgate of similar complaints and calls for justice.

This call came in from both residents and visitors to the island alike. Individuals from neighbouring island Barbados also chimed in to voice their annoyance over the issue that was also affecting them in their neck of the woods.

With all the support gained, Jn Pierre Emmanuel received her final push when Minister for Public Services James Fletcher as well as the Director General of the OECS, Didacus Jules advised her to raise a formal complaint through a letter to the regulators which she did and copied the provider, Digicel.

This was when the idea for a petition was formed by media personality Rohan St. Marthe calling on Digicel to rethink their anti-consumer decision, banning users from calling on WhatsApp and thus, the movement had started.

By Friday, 700 people had already signed the petition.

The message was heard loud and clear by the telecommunications company who on Wednesday, sent this message to Jn Pierre-Emmanuel:

“Dear Valued Customer,
We have been following closely the comments and opinions of you our valued customers in relation to VOIP (voice over internet protocol) services on our network.

As a company founded on always delivering on our promise of best value, best network and best service, we pride ourselves on listening to our customers and doing everything we can to ensure that we provide them with the best customer experience.

As such, please be assured that we are working on an approach to VOIO services which takes into account and protects our customers’ interests, our business interests and our investment in St. Lucia.

We will be announcing this in a few weeks time and ask for your patience and understanding in the interim.”

This response egged the Press Secretary. She has even called on users of the LIME network to give their support because she said they can never tell if the same could happen to them.

She said: “This issue does not exist on the Lime network. I can attest because I am also a Lime customer. So we should ask what is so different. What the Lime customers like myself need to consider too, is that there is a possibility once this goes unchecked and unchallenged that we may end up in the same boat.”

When asked, why it had to take her, a public figure to get this movement on the way seeing that the problem existed long before she spoke about it, Jn Pierre-Emmanuel said: “Many of us are afraid to speak. Many of us are afraid to stand out. Do you not realize most of us rather settle and fit in? We are afraid to be labeled, we are afraid to be criticized and the most popular sentiment is that everyone else must do what we need for us, but ourselves. Then for some, they simply did not know how and where to express it. We are talking about Digicel. Many people see money and power…the sponsorship and advertising dollar. That can intimidate anyone.”

She added: “Every movement starts with one step but one step is never enough to cause change. Therefore, it is still not too late for people to express their dissatisfaction or to sign on!”

Jn Pierre-Emmanuel implored locals to practise using their collective power to make changes saying that injustices will continue if people don’t speak out against them.

She said: “If you choose to be exploited in silence, too bad for you because you will continue to suffer. It is only when you speak up, you will realize how much support you have and where your voice can go. You simply need to be responsible in how you advocate. Be passionate, but respectful. Then your voice will be respected.

She also had a message for the service providers: “Lime, Flow, Digicel, the banks, every single one of these entities must give people what they pay for! If there is an issue with a service, you need to inform the customer and where necessary, you must compensate them! We all must call them to account. For me, once I am inconvenienced, I will speak. So Lime ought not to take any comfort from this. This is not about Digicel. It is about my righty as a customer and my dissatisfaction with a policy. There was no disclosure. They just went ahead and acted in what they thought was their own interest. No regard whatsover, for the customer. Is that the position they will take with every new technology or advance that make communication cheaper and easier? On top of these expensive plans? How unreasonable and unfair?!”

THE VOICE attempted to elicit a reaction tot he controversy from Digicel but was referred to the above mentioned statement which was also posted on their Facebook page as their only response.