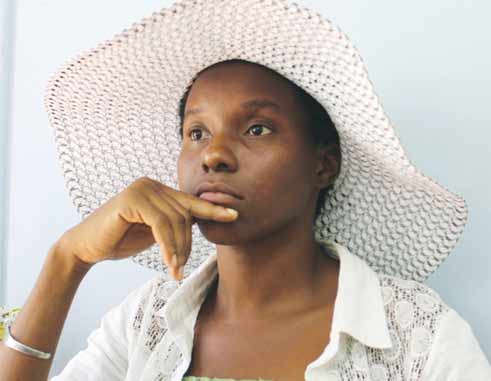 THE staff at the Ministry of Education have fired back at a woman and her husband who have gone on record to publicly make accusatory complaints about the Ministry regarding an altercation which allegedly led to the couple’s stillbirth.

Mother of three, Molly Arthur came to The VOICE on Wednesday afternoon and spoke of a July 23 incident claiming that her husband was physically attacked by security guards at the Ministry after they went there to make a request concerning her daughter’s Common Entrance results.

Admitting that she has a tendency to get loud, she also conceded that she had indeed raised her voice as she was not happy with the response she was given. She said security was brought in and they began to assault her.

Arthur said it was whilst she was being attacked that her husband, Benedict Arthur came to her aid and this is when the situation escalated. “My husband was attacked on the Ministry’s premises and I witnessed everything. I heard everything. Up to a day like today, no police, nobody can call and say anything so I want to know what the Minister is saying.”

Arthur said this incident led to her going into early labour which coupled with what she called negligent treatment at the Victoria Hospital, led to the death of her unborn son.

She said: “Right now, I need justice for my husband and my son that I just lost because they started it and they’ll finish it because if it was not for them, my son would be alive and if I can’t get justice one way or the other, I’ll get it some way how I can. I don’t care what I do because no one touches my child, no one touches my husband and this can get dirty…it can get VERY dirty.”

Arthur said a few days following the incident, she went to the hospital in pain as a direct result of the trauma that she endured at the Ministry. She said she was made to wait for two hours at the Casualty department and then was later sent to the Maternity Ward. Upon arrival there, she was told that the doctor had just stepped out. This, she said, was “pure negligence” on their part, and caused the stillbirth of her son. She said she plans to fight for her son because “he was born with life in him but that was taken away”.

In complete contrast to Arthur’s claims, several members of staff at the Ministry of Education including the Deputy Permanent Secretary, Dr. Marietta Edward, had a completely different story to Arthur’s.

Dr. Edward said she was on the third floor of the building with Chief Education Officer, Marcus Edward in attendance when they heard the commotion going on outside. When both followed the noise, they came across Arthur in the Exams Unit screaming in anger at the staff.

She said: “I remained quiet because I did not think that anybody should have engaged Mrs. Arthur given the way she was behaving. The chief however, tried desperately to calm her down. He spoke with her and the staff but she was bellowing at the top of her voice.”

The DPS said she took the time to carefully study Arthur’s daughter’s results and the findings were all accurate but since the commotion had continued, her priorities switched. She said: “My only concern was for the staff. And I want people to understand that apart from our regular staff, we have young staff members who are here doing a summer programme. These are students from Sir Arthur Lewis Community College and a few from UWI who are not regular staff members; they’re just here manning the front desk and this is what they’re being confronted with. So you can imagine how terrified those students were…

Dr. Edward said contrary to Arthur’s claims of being attacked herself, she had categorically warned her staff to not lay a finger on the irate pregnant woman regardless of her level of provocation.

Several members of the public who were witness to the entire incident expressed disgust over Arthur’s behaviour and questioned why she had not been thrown out.

Dr. Edward went on to say that Arthur has also built up a reputation for being a troublemaker outside of the Ministry so much so that she and her husband are no longer allowed, without a police escort, to set foot on the grounds of the Grand Riviere Primary School, her daughter’s last primary school after previously being transferred from two different primary schools. This was as a result of her threatening the school’s security guard.

She said  even the Chief Education Officer has been at the receiving end of her personal attacks and threats and as a result, he was currently in the process of obtaining an injunction against Arthur to prevent her from coming near him.

Whilst at the Ministry, staff members from three different floors poured in to give their accounts of the most recent as well as previous run-ins with Arthur and her husband. Here is what they had to say;

Staff member 1: “On that day I was sitting at the front and I noticed that she passed with a breeze. So from the time I saw her, I knew it was trouble…it was “Murder She Wrote” already. She walked in, I watched her and then she started with the fact that I was attending to other people in front of her. Then after, she made the big commotion and I was just thinking, ‘I Molly a mad woman?’ We had to call security and so she started cursing and getting on and said that she was going to kill us, burn the building and she just went on and on, getting on really bad.”

Staff member 2; “When the security was trying to get her to leave the department, the husband was saying, ‘Don’t touch my wife’ and we were just trying to get her to leave the building. That’s when he pushed Ray (the security guard) first. So the security guard pushed him back and they forced him out of the department. He wanted to fight but the guys were bigger and stronger than him so they pinned him downstairs…he was not injured because he was down there saying he would burn the Ministry.

Staff member 3: “I told the security, please do not touch Molly because she’s pregnant; she responded, ‘Am I pregnant for your father? Who says I’m pregnant?’ I said don’t touch her, she’s just saying that but don’t touch her. So nobody touched Molly. That’s not the first time she’s come into the Ministry. She curses everybody every time and goes out when she pleases.”

17 year old Sir Arthur Lewis student on summer programme: “At first I was shocked because up to now, I never said a word to her because I was so afraid”.

Staff member 4: “I would like to see her banned totally from coming into the building. I’ve had enough of her. Molly would just walk in, respect nobody. She’d ask for Marcus…she refers to the chief as Marcus and the Minister as Robert and she curses anybody who says anything to her”.

Security Guard at building entrance: “That woman is too disrespectful for my liking…she has no respect at all. I’m not afraid of Molly, she’s no match for me. She needs to respect herself and respect us”.

Dr. Edward confirmed that a letter has been drafted to be sent to the island’s Attorney General to see to it that similar measures taken against Arthur by the Grand Riviere School can be adopted by the Ministry.