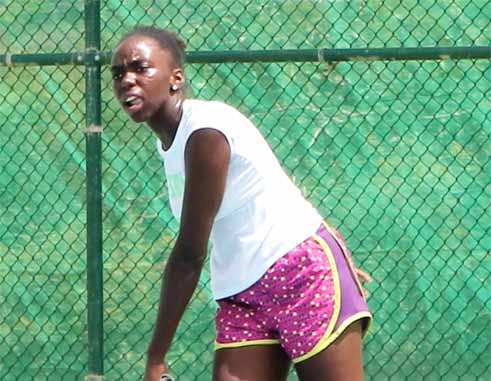 ST. LUCIA’S under -14 tennis sensation Meggan Williams continued where she left off at the 32nd Coca Cola ITF Junior tournament to emerge as champion in Trinidad and Tobago ITF Junior Tennis Tournament on Thursday.

This was William’s fourth title for 2015.

The student from Leon Hess Comprehensive defeated Jade Tom Yew in a thrilling encounter 6 – 3, 7 – 5 to seal the singles championship.

On her way to the finals Meggan faced OsenyonyeNwokolo of Trinidad and Tobago and won 6 – 3, 6 -2 to move to the semifinals of the Girls Singles draw. The following day she faced Kalyca Fraser of Guyana winning in straight sets 6 – 0, 6 – 0.

In the Girl’s Doubles under – 14 Williams teamed up with Trinidad and Tobago SolangeSkeene. The two ousted Abigail Jones and Vivian Sabgs 6 – 1, 6 – 0. In the semi final round the pair defeated Trinidad and Tobago’s Lily Lanser and Jade Tom in straight sets 6 -3, 6 -1 to march into the grand final.