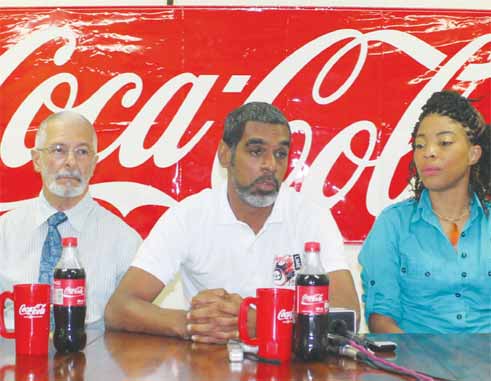 The championship was launched at a press conference held earlier this week at Du Boulay’s Bottling Company, long standing sponsors for the event, who have once again come forward in partnership with LIME.

Speaking at the press launch Managing Director for Du Boulay Bottling Company Dunstan Du Boulay said, “Two years ago we decided to partner with LIME to take the championship to a different level, as we are aware LIME brings to the table substantial financial, communication and other complementary resources that will further enhance and build on the fine established tradition of this prestigious event. This tournament has been sanctioned by the International Tennis Federation since 1992”.

Du Boulay said he was pleased with the level of local participation in the championship this year. “It is most encouraging to see over the last few years a proliferation of local participation in the championship and this is largely due to efforts taken by the government of St. Lucia and the St. Lucia Tennis Association to establish proper tennis facilities at Beausejour, the renovation of George the V Park and other facilities around the island. This has seen the bringing of tennis to the grassroots level creating a whole new dimension for the development of tennis”.

He continued, “The substantial participation of the local players in the tournament this year is a clear indication of the success of taking the tennis to the grassroots level. I can say that Du Boulay’s Bottling has been and will continue to be extremely proud of this junior championship because of the substantial contribution to the development of local tennis and particularly due to the advantages and opportunities that are now available to players in all field of sports.

To date the company has spent in excess of EC$3 million over the 32 years of sponsoring the championship.

Also speaking at the press launch were SLTA 1st Vice President Trevor Hunte and NTC General Manager Buzz Erlinger Forde. The tennis officials shared similar sentiments when they thanked Du Boulay Bottling for its sterling contribution to tennis on the island and for their unbroken 32 years of sponsorship.

They took time out to appeal to sports enthusiasts in St.Lucia to come out and support the tournment and the many local and overseas players due to battle on the various courts.

LIME Representative Charlene Jn Baptiste said LIME was pleased to be associated with Du Bouly’s Bottling Company for the second straight year as a partner in” this wonderful initiative.”

Jn Baptiste said: “We came in the 30th year: The event is a mature one and that’s one of the reasons why we have partnered with Du Boulay. We look to tie ourselves with organizations that invest to make the event work. Beyond that however, another reason why we decided to partner in this event was the plans that we saw from the Tennis Association to help grow the sport in St.Lucia”.

Jn Baptiste continued: “The tournament is happening. that’s great, but what we are most interested in is what happens beyond the tournament. What does is mean for the participants after the lights go off on the court. What does it mean to the students who get the opportunity to meet with a trainer once a week, once a month, free of charge? What does it mean for them meeting other students? That is what LIME is most interested in”.

Like previous years this year’s tournament will again attract players from the Caribbean, Europe, the United States of America, Central and South America and Asia.

Matches will serve off as early as 8.00 a.m. and admission is absolutely free.