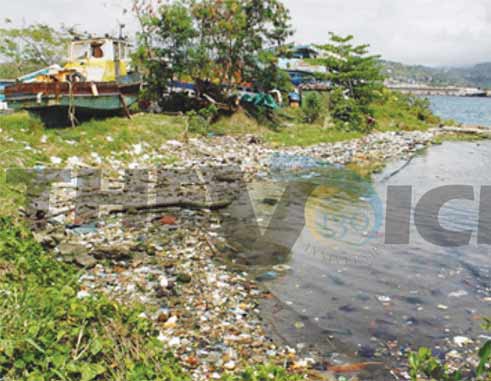 THE debate on the environmental risks caused by the indiscriminate dumping of plastics continues to be a sore point as local lawmakers move at snail’s pace to enact key legislation.

With Saint Lucia now in the throes of the hurricane season, flood-prone areas are likely to experience the consequences of irresponsible waste disposal habits, especially as it pertains to getting rid of plastics.

In lieu of the absence of requisite legislation coming on-stream to curb the plastic problem, there are ways of countering the problem. At least, that’s the message being pitched by Permanent Secretary in the Ministry of Sustainable Development, Energy, Science & Technology, SylvesterClauzel.

“Very often we think it’s something that people from outside have to do,” Clauzel said. “But there are very basic things that we have to do. Storms will come and go, but our indiscriminate (dumping) of plastics cause blockages of drains and contribute to flooding. So it is for one to understand those connections and mitigate our own actions.”

Clauzel made the comments as he appeared on a panel recently to discuss the much-anticipated conference on climate change that will take place in Paris, France in December. At that conference, a multilateral agreement is expected to be signed to curb the global emission of greenhouse gases.

The problems associated with the wanton discarding of plastics become most visible whenever the island experiences heavy rainfall. Especially in low-lying areas, plastic bottles change the landscape for the worse. Plastic and its inherent problems seem ubiquitous.

Some years ago, then Prime Minister Stephenson King brought plans to the House of Assembly wherein he put forward his government’s intention to enact legislation governing the recycling of plastic bottles. That legislation was supposed to include a refund policy for empty plastic bottles. Nearly six years later, such legislation remains to be enacted.

Meanwhile, Clauzel said a bill governing how plastics should be treated to reduce their detrimental impact on the environment should be making its way to Parliament soon. The “Returnable Containers Bill”, he said, is now in its draft stage but “we’ve had some challenges with it.” But with renegotiations for contracts pertaining to the haulage of garbage about to take place, Clauzel said some hope is on the horizon in tackling the plastic problem.

“So we’re looking to see whether we can find a way to include in that the recycling of plastics and cans so that we can begin to cause people to recycle and that we’ll have some kind of collection system for them… We believe that might be the way to cause that change,” Clauzel explained.

With the island’s landfills set to reach their limits shortly, dumping plastics at such locations indefinitely seems out of the question. That is why it becomes increasingly important to correct a problem that continues to generate more environmental mess and public debate.

Take the case of the United States, for example, where 3.3 million tonnes of plastic is discarded annually with only 6.5% of that volume actually being recycled and 7.7% combusted in waste-to-energy facilities that turns garbage into heat or electricity.

The remaining 85.7% of discarded plastics make landfills their final destination where they will take as much as 1,000 years to decompose. Moreover, the ecological problems accrue as pollutants leak into water and soil. According to estimates, about 100 million tonnes of plastic debris can be found swimming in the globe’s oceans, creating grave implications for the health and safety of marine life.

About 8% of the world’s total oil production goes towards producing plastics – both as a raw material and for energy needed during the manufacturing process. Thus it becomes necessary for the use of plastics to be reduced, as well as to reuse and recycle. However, Clauzel sees a limitation to the recycling effort being called for locally.

“The volume of plastics we produce does not really justify compacting them, stripping them and getting ships to come and take them out,” the Permanent Secretary said. “But we have a lot of small recycling entrepreneurs who are doing a fairly good job.”

As such, Clauzel believes that at the domestic level people need to act more responsibly when it comes to the use of and discarding of plastics.

“We need to begin to see what it is that we need to do. We can separate our garbage at the domestic level and set up compost heaps in our backyards,” Clauzel said.