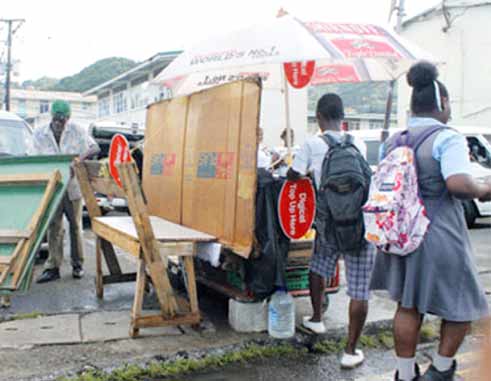 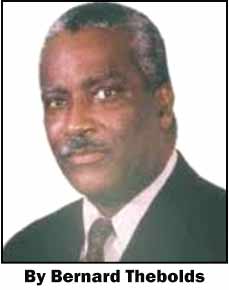 CASTRIES (founded in 1650), the principal town in the island, is situated at the extremity of the beautiful bay of that name and was originally called “The Carenage”. It was re-named in 1785 in honour of Charles Eugène Gabriel de La Croix de Castries, the aristocratic French Colonial Minister of the day. The plain on which the town stands is in some places below the level of the sea and consists mainly of “made” or reclaimed land. It is bounded on the North by an inlet of the bay and the lands of Sans Soucis (probably named for its then swampy inaccessibility), on the East by the Chaussee (or Causeway) and the lands of Leslie, on the South by the river and Morne Fortune, and on the West by the Harbour. The town is in the form of a quadrangle; the streets are wide and well laid out, extending in parallel lines from East to West and from North to South and ornamented with footpaths or sidewalks. The upper swampy parts of town near the La Chaussee, were chiefly occupied by the humbler gentry, with the lower bord-de-mer, more salubrious parts nearer the harbour, particularly Micoud and Laborie streets, occupied by the wealthier classes.

Mention should be made of a number of edifices which grace the town and stand out as architectural landmarks. First, there is The Pavilion or Government House, a spacious wooden structure, very tastefully laid out and elegantly fitted, to be worthy of the representative of the Sovereign, located at the western extremity of Morne Fortune in refined gardens, and commanding one of the most picturesque views in this eminently picturesque island. Below lies the bay of Castries, the quay skirted with vessels of every size. The Protestant Church with its marvellous steeple (a work of exquisite art, destroyed by a lightning strike and never rebuilt), situated in the north-east corner of the town, was completed in 1832 to accommodate about two hundred persons. The Asylum, located across the bay in an estate called Vieille Ville, part of Fort Vigie on a peninsula on the north side of the harbour, and used as a home for the destitute poor. The Catholic Church, on the eastern side of the Place d’Armes, an imposing structure with a complex roof and capable of seating eight hundred, the construction of which challenged architects and builders of the day (and would no doubt be a challenge even today), graced with eighteen pillars which serve the double purpose of solidity and ornament; the Place d’Armes itself, a tranquil refuge in the very heart of a bustling town; the Central Market erected in the 1830s (and completely reconstructed in the 1890s) near the north-west corner of the harbour, and finally, the Royal Goal, on the south side of the river, “one of the best in the West Indies in point of cleanliness, order and general management”.

The above narrative is taken, with my supplementing commentary, from Henry Breen’s fascinating little documentary about our country, written nearly two hundred years ago, after the abolition of slavery. Today, much has changed, some depicting the progress of two centuries. The Pavilion, Catholic Church and Anglican Church, the Central Market, still stand, their grandeur as monuments to our past. The Place d’Armes (with its 200 year-old ornamental trees) remains, now an imposing tribute to Hon. Derek Walcott, our 1992 Nobel Laureate. The Asylum is gone (though it’s now derelict structure remains), and the Royal Goal has been converted to offices but still within the embrace of law and order. The downtown enclaves of the wealthy have been ravaged by successive disastrous fires and the general flight to suburbia and now given up to commercial activity of every type. New edifices grace our capital, some a worthy tribute to the past. The William Peter Boulevard sought to duplicate one of the best attributes of our French ancestry; the Dale Carnegie Library, a fairly recent (1920’s) imitation of the classical colonnades of the period, and the modernistic and dominating Bank of St. Lucia building.

But, Castries today, and especially to the visitor can only be described as a filthy junk-yard. Here destitute poor roam the streets, seeking scraps that are casually thrown into filthy garbage containers or in drains, and then sleep with abandon on the same wide sidewalks that were once the place for evening soirees and strollers; mini-bus parks occupy almost every street leaving building corners and drains as stinking testimony to the near total absence of public facilities or the simple imposition of law and order on our streets. Once beautiful William Peter Boulevard is now an informal panoply of street shops under tents, loudspeakers blare an uncomfortable cacophony of noise to the passer-by, and street urchins vie with one another to extract monies from office workers to assist with parking their cars, otherwise for free, the entire day, in the very heart of the capital. Stray dogs roam with abandon and rodents, symbolizing an always possible health catastrophe, can be seen almost everywhere. Even spaces beneath the bridges that cross the capital’s river, now a cesspit, have become accommodation for transients and the destitute.
A 1990s PAHO report asserted that there was a migration of near 1% p.a. of the general population into the Castries basin (probably double that today), yet the relevant authorities have instituted no plan or response to this deluge; and predictably and inevitably, the rise of slums everywhere, dominated by criminal gangs, distinguished by their audacity and scorn for the law. Ugly, impromptu and informal constructions litter the sidewalks, selling everything from store merchandise to alcohol, with the paraphernalia left exactly in place for the next day’s resumption. Sidewalks the world over, are essential conveniences for pedestrians and one must doubt whether any government has the authority to convert a sidewalk to any alternative purpose; even elegant “The Pavilion” (Government House) has a permanent establishment of informal street vending outside its entrance, a major traffic thoroughfare, without even the simplest concession to panache or style.
It is a disastrous free for all. To add insult to injury, visitors arriving at Port Castries are wooed with a “beautiful St. Lucia” slogan without shame by our tourist authorities. Just who is to blame for this catastrophe?

We don’t have to look far to point fingers. Simply, successive elected and unelected but compensated public officials have, over decades, sat idly by or even contributed to the demise of our once proud Castries. There is a Minister for Local Government who is charged with looking after the necessities of all our towns and villages; there is a Minister for the Environment who very appropriately has responsibility for the environment of our communities; there is a Minister for Health and there are myriad town and village committees some staffed with very eminent citizens, compensated, and also charged with the duties that go with the appointment of town and village councils; then there is a Ministry for Planning and a DCA, seemingly invisible and about which we will say no more; and finally, there is a Prime Minister among whose prime responsibilities, must be to provide the means and ensure that his appointees and public servants do their work. In an extraordinary twist, the current Minister for Local Government, who hails from the small southern town of Soufriere, can boast of presiding over the most beautiful of all the nation’s towns and villages, and probably among the entire Caribbean, with its clean and exquisite little waterfront, flower gardens, police station, bars, restaurants etc., and he deserves to be congratulated; and street vending appears to be very effectively managed; but please, find another location for that quite inappropriate and dominating advertising billboard at the very entrance to what is a splendid little town.

That honour must be reserved for the citizens’ welcome to visitors. I encourage everyone to visit Soufriere and see for themselves. Residents of our northernmost town, Gros Islet (including Rodney Bay), take note. You have all the necessary attributes, and with good management, can make your community the most attractive place to be and live, certainly in St. Lucia and possibly the wider region; and never under-estimate the entrancing and enhancing power of gardens and flowers, or just well-kept lawns. The town of Gros Islet remains a Mecca for hundreds of Friday evening street partygoers and visitors, but shamefully, its patrons will have a hard time finding a single public convenience.

It is we, the citizenry, who have tolerated this abuse by public officials without complaint or protest. It is we who walk the stinking and noisy streets because we cannot use the sidewalks, because they are all occupied by vendors’ paraphernalia, left on the same sidewalks overnight, a menace to the passer-by and home to all kinds of otherwise insalubrious occupation. It is the Chamber of Commerce, that paragon of the business community that has sat by, impotent and idle, while the soul of small business in our country is being turned into an informal sidewalk enterprise, on their doorsteps, while the same Chamber’s members only see closure as their future.

It is the government, that seems to accept disorder, yet has imposed exorbitant and ridiculous illegal-parking fines (very selectively), some in excess of $250.00 for a single offence, without protest and among the highest in the world, yet even in the near total absence of managed parking facilities and the obvious widespread abuse by motorists, earns only a pittance from those same parking fines, and that says something else. It is us the shoppers, who have abandoned the Capital because we simply cannot find a place to temporarily park so we can run to the bank or any place for that matter, for fear of a debilitating fine. Cities and towns the world over use income from short-term parking as an essential supplement to limited budgets, but not here in St. Lucia.

Who is to blame?

It is we, the citizenry of Castries, a city with a rare and proud pedigree of centuries but now reduced to an unappealing, ungovernable, dreadful, unsightly and undisciplined congregation of clutter where a stinking bog once existed, an epoch ago.
Castries, described by the earliest pioneers as “among the unhealthiest places on earth” but later prized by both French and British colonizers may, thanks to our own indifference, be reclaiming its genesis.