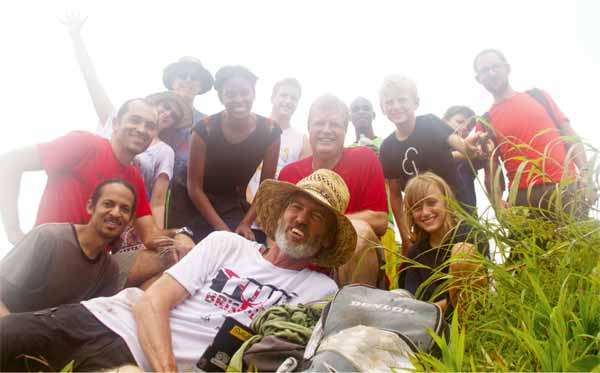 FITNESS enthusiasts and civic-minded individuals are being encouraged to take on a physical challenge while contributing to a charitable cause.

Climb for the Cause is a trek to the summit of Mount Gimie – the highest peak in St. Lucia – to raise funds for the Children’s Literacy Action Support (CLAS). The climb, slated for Sunday August 30, is the second of two hikes. The first occurred last Sunday, with a total of 13 hikers, among whom were nine, 10-, and 11-year-olds, who reached the summit after only 2 ½ hours. The last two hikers reached the peak 20 minutes later (2 hours 50 minutes).

The climb up Mount Gimie is an estimated three hours to the summit and another three hours to the base, making it a total of six hours. For all persons, transportation will be provided from the Derek Walcott Square near the Central Library. Departure time is 6:30 a.m. Interested persons can register at Money Gram on the Ground Floor of the Blue Coral Mall or call 718 – 5177 to register.

CLAS is a non-profit organization based in the community of Marchand in Castries East. The organization, which has been in existence for 10 years now, caters to the needs of children who are economically deprived by providing them with meals, teaching them to read, or helping them get into, and remain in the formal school system.
Such support reduces the chances of these children dropping out of school and engaging in anti-social behaviour that often leads to gang formation, and involvement in crime, violence and promiscuity.

Over the last 10 years, CLAS has provided tangible support, guidance and counselling to approximately 70 children from Marchand and environs. CLAS was founded by Virgil Leonty who hails from the Marchand community, and who has seen first-hand, the ill-effects of poverty and deprivation on some of the community’s youth.

In March 2015, CLAS established the Loraine Jolie Scholarship Fund. The aim of this Fund is to provide financial assistance to underprivileged children who perform very well in the Common Entrance Exam. The Fund bears the name of CLAS’s former Legal Advisor, Attorney-at-law Loraine Jolie, who died in October 2012. Miss Jolie was one of CLAS’s salient benefactors. Climb for the Cause is a fundraising event to help establish this Scholarship Fund, which will be launched officially in October 2015.