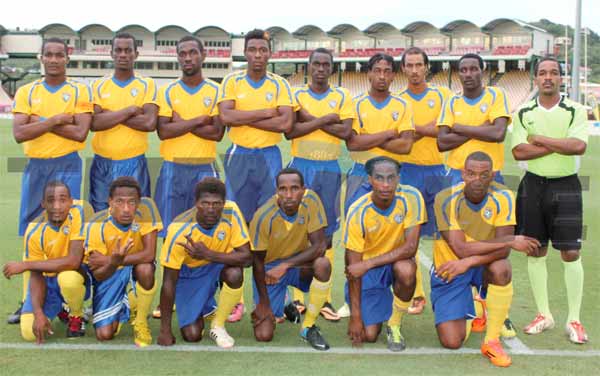 THE 2011 champions Anse la Raye have a slight advantage heading into the second leg of the play-offs for the Blackheart/St. Lucia Football Association Knockout football tournament, while Mon Repos and Desruisseaux played to a 1 – 1 tie in the first leg of two play off matches on Wednesday evening at the Micoud Playing Field.

In the first encounter Anse la Raye came from being one goal down at the half time win 2-1 against Choiseul and take the advantage into the second leg of the play-off tie.

Choiseul took a 1 – 0 lead at half time courtesy of a goal from Miguel Cox in the 15th minute. However goals from Dane St. Croix in the 69th minute and Ked Cadasse, more known for his exploits as a national cricketer, in the 79th minute brought Anse la Raye victory.

In the second encounter Desruisseaux and Mon Repos played to a 1-1 draw. National striker Gelani Neptune put Desruisseaux ahead in the 10th minute and they led 1 – 0 at the half time whistle.

On the resumption it was Mon Repos team that would celebrate in the 72nd minute of play when Silvious Stephen converted with a shot from a very acute angle making it 1-1. That’s how it stayed till the end making it very interesting for the second leg of the encounter.

Desruisseaux had the better of the game creating several scoring opportunities but failed to convert them.

Meanwhile, the second leg of both play-off ties will again be played at the Micoud Playing Field on Sunday August 23. The winner of the play-offs will get the final and sixteenth spot for the 2015 Blackheart/SLFA