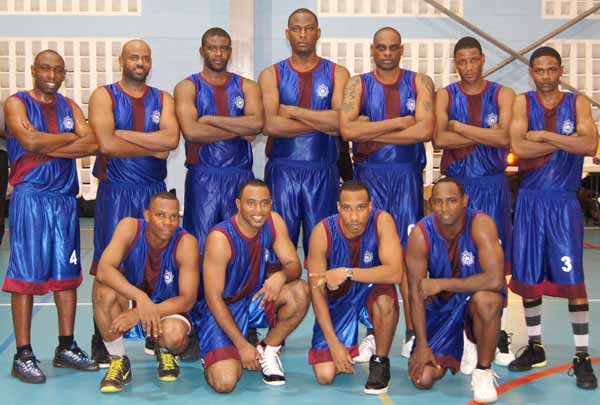 THE St. Lucia Basketball Federation in collaboration with the Chamber of Commerce will to host their third annual Commercial Basketball League starting Friday at the Beausejour Indoor Practice Facility.

Once again, KFC has come on as title sponsor and the league will be called the 2015 KFC Commercial Basketball League.

On the opening night defending champions St. Lucia Fire Service will take on The Body Holiday (LESPORT) from 6.00 p.m., while on Saturday there will be a double header with The Royal St. Lucia Police against BOSL/ECFH from 6:00 p.m. and the Goddard Group clashing with the Inland Revenue Department from 8.00 p.m.

At the press launch held at the Chamber of Commerce conference room last week the participating teams were introduced, and informed of the rules and regulations, new 2015 league logo unveiled, new activities such as the All-star game and CSR initiative and draw were held for the team groupings.

President of the St. Lucia Basketball Federation Leslie Collymore said: “I am pleased with the level of participation in the KFC Commercial league by the public and private sector and wish to thank the St. Lucia Chamber of Commerce and title sponsors KFC for their continuous support.”

Other Sponsors of the Commercial League include: Supreme Bleach, Exelsign, A.I.M, Crown Jugglers, 123 Digital and Bengay.

Meanwhile, The Executive Director of the St. Lucia Chamber of Commerce Brian Louisy has also lauded the success of the KFC Commercial Basketball League. “It is only as a result of the hard work of the St. Lucia Basketball Federation and recognition of the private and public sector of the importance of sport as a major tool for forging comraderie, team building, pride and the spirit of completion among its staff and peers.”

The format for this year’s League has changed and includes 4 groups of 4 teams each. Each group will play a round robin in the first round where the top two teams of each group will qualify automatically for the quarterfinals along with the next two top teams of all the groups based on their win/loss records. The quarterfinals will see eight teams face off in an elimination round, where the winner of each game will move onto the semifinals which follow the same format.

The winner of the two semifinals will play for the championship and the losers for third place. All games will be held at the Beausejour Indoor Facility on Wednesday’s, Fridays and Saturdays beginning at 7:00 p.m. on Wednesdays and Fridays and 6:00 p.m. on Saturdays.