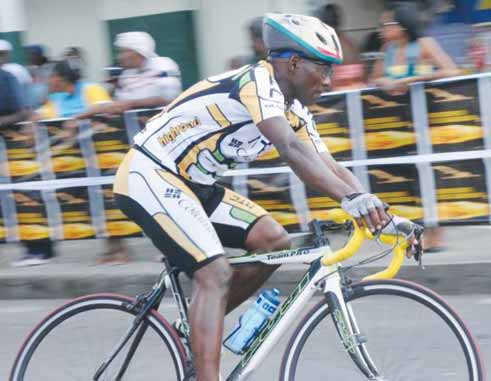 VETERAN cyclist Elvis Joseph emerged victorious as he came from behind to out sprint the experienced Winston Williams in the 80 kilometre road race held on Sunday in a time of 2 hours 14 minutes 17. 92 seconds.

The event from the Castries Waterfront to the Choc Round about and back nine times quickly settled down to a select bunch consisting of National Champion Fidel Esnard along with Winston Williams, Eustace Dookie, Gillan Moses, Juniors Andrew Norbert, Dave Charlery, Juveniles Kluivert Mitchel and Jesse Mentor.

At the 20 kilometre mark Esnard suffered a puncture which set him back 3 minutes. But he soon caught up with Romueous Noel 1st place Junior at the National Championships who got dropped from the pack. Noel managed to latch on the back wheel of Esnard, however inexperience showed as Noel touched Esnard’s back wheel and went down in a crash and had to abandon the race. Esnard was able to work his way back to the pack after an impressive chase which surely took some energy out of him.

In the process there were several attacks. The 2015 Independence Cycling Criterium winner Kenneth Mathurin took off and was quickly joined by Junior Andrew Norbert of Mon Repos in a break which lasted some 25km. During that break Norbert suffered a puncture, got a quick change and was able to rejoinMathurin at the head of the race.

However, the main bunch had disposed of some riders including juniors, TerrianoFelicien, Calixte Williams, Dave Charlery, Juvenile Jesse Mentor, Kluivert Mitchel and Valence Aurelien still hanging in there as they began to close the gap on Norbert and Esnard. The bunch eventually caught up with the leaders with about 16km to go. Winston Williams who was relatively quiet throughout, along with Gillan Moses and also Esnard tried to ride away. However these attacks were quickly shut down.

With 8km to go Dookie was out suffering with cramps. With 3km to go Dave Charlery and Mitchel were unable to hang on, with 2km to go Aurelien, Williams, Esnard, Moses and Joseph upped the pace a few notches as they opened a gap of about 500 metres along the airport strip.

Junior cyclist Norbert and Mathurin clawed thzr way back outside LUCELEC’s office with little time for recovery and with 300 metres to go the attack began for the sprint. With about 50 metres to the finish it appeared Williams was on his way to victory. However Elvis Joseph had other ideas as he powered his way by to snatch victory from behind, Esnard coming in 3rd in 2 hours 14 minutes 17.92 seconds and Moses 4th in of 2 hours 14 minutes 19.74 seconds after the misfortune of his shoe getting unclipped in the sprint. Aurelien finished 5th place in a time of 2 hours 14 minutes 21.89 seconds.