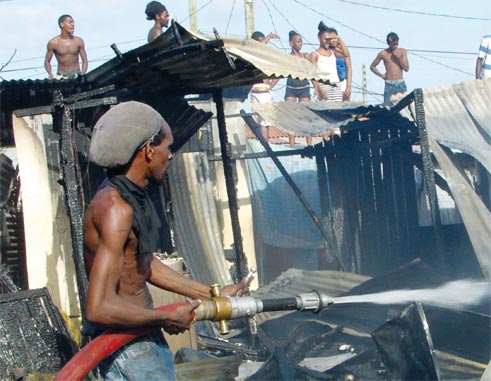 FIVE houses at Westall Group in Vieux-Fort were reduced to ruble and another was partially destroyed by a weekend fire which left nine people homeless.

The inferno which occurred on Sunday about 3.00 p.m, created much panic in the area, as it ripped through the wooden structures.

The blaze started in a wooden building which was not electrified.

Community spirit overflowed as residents, especially young men, fought bravely to extinguish the fire, which was threatening other buildings. Some of them lost their personal belongings in the process, as they braved the intense heat to offer assistance. Their cooperation earned them kudos from the fire officers on the scene.

“The public offered a lot of assistance…They did the bulk of the mopping up. That’s commendable,” said Claudius Evans, Station Officer, attached to the Vieux-Fort Fire Station.

He said the eagerness of the public to assist did, however, create a bit of inconvenience to the fire fighters because it resulted in some of their hoses being wrongly connected.

Evans said the cause of the fire is unknown, adding that when they arrived on the scene the houses were already destroyed.

Peter Albert, the owner of the house where the fire started, said he was away when the balze began.

According to him, moments before the incident, he had just finished cooking on charcoal and had put out the fire and left home.

“I put out the fire but was not too sure if there was some fire still in the coals,” Albert recalled.

He said everything in the house was destroyed. “Everything is gone. I have nothing left,” he grieved.

CoranaErystee, another victim said she was in her bathroom when she was alerted that a house in the neighbourhood was on fire.

“I only had time to save my gas tank and a small radio,” she lamented.

According to her, the tragedy has left her weak and devastated.

Kerry Evans, one of the young men who assisted in fighting the fire said he saw the billowing smoke some distance away and quickly proceeded to the scene where he quickly sprung into action.

“I ended up holding a hose to put out the fire. Wires kept sparking all around me…I lost my wrist watch in the process,” he said.

Evans said it was a very tough and risky job, adding that he felt he had to help.

Onlookers said it was truly a spectacle to see some young men being tossed around by the pressure of the water from the hose, as they fought the blaze.