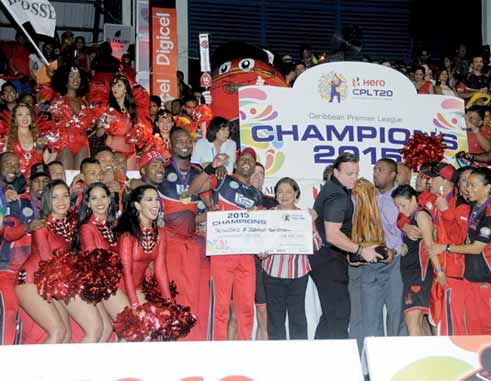 Tridents Go Down In Thrilling Final.

THE Trinidad and Tobago Red Steel thrilled a sold out home crowd with victory in the final of the Hero Caribbean Premier League to claim their first title.

A century partnership between Cameron Delport and Kamran Akmal set up a winning total for the Red Steel with both men making fifties.

The Tridents chase stuttered after a brisk start as Sulieman Benn and Derone Davis strangled the innings in the middle overs. When the final ball was bowled the Port of Spain crowd went wild cheering their heroes.

A pristine surface at Queen’s Park Oval was enough for Dwayne Bravo to elect to bat without hesitation upon winning the toss. Leading run scorer, Jacques Kallis, got off the mark with a boundary that was well cut for four but he was soon struggling. When dashing for a quick single the South African veteran pulled up with a muscle problem. He kept going after treatment, but not for much longer as he was bowled by an excellent Robin Peterson delivery.

Peterson’s introduction was enough to keep the Red Steel’s scoring rate in check as he followed up his wicket-taking over with a maiden bowled to Kamran Akmal. It wasn’t until Peterson’s third over that he was hit to the boundary as the wily left-armer kept things under control.

In the Eliminator match Saturday, Akmal proved a match winner and after a slow start here he started to find that touch in the final, taking his side to 68-1 off the first 10 overs. Both Akmal and Delport used that as a platform to increase the run rate in a partnership that was worth 102 runs, the best by the Red Steel this season.

Akmal should have gone when he was on 44, but he was dropped by Ashley Nurse at midwicket off the bowling of Kieron Pollard. He made the most of the opportunity to move to his first Hero CPL half century.

Ravi Rampaul had a chance to dismiss Delport when the batsman smashed the ball in the air back at the bowler but it would have been a miracle grab if he had taken it.

Delport greeted the return of Peterson into the attack by ruining the spinner’s figures. He had gone for just nine runs in his first three overs and went for 15 in his last with Delport hitting two Hero Maximums as the Red Steel accelerated brilliantly.

Delport departed for exactly 50 when he chipped a catch to Pollard to go caught and bowled. His partner in this century stand departed the very next ball when Akmal was caught in the deep having made an excellent 46-ball 60.

Those back to back wickets brought the Bravo brothers to the crease. Darren struggled but Dwayne finished with 29 off just 15 balls in a brilliant cameo that took his team to a match winning 178-5 off their 20 overs.

The Tridents got off to a flying start to their innings thanks to, USA international, Steven Taylor. He began with a six and was outscoring Dwayne Smith, his experienced opening partner. He made it to 20 off 10 balls before he was dismissed LBW by Johan Botha.

With Taylor gone Smith put his foot down as the Tridents made it to 61-1 off their Powerplay. They sent in CPL debutant Kyle Corbin at three but the young man really struggled to get going. He was almost dismissed when on eight from 15 balls but Delport spilled the chance. Two balls later Smith chopped the ball on to his stumps for 49, and the Barbados team began to undo the fine work they had done so far.

Neither Misbah nor Corbin could find the boundary as the required rate rose above ten an over and the Tridents went 29 balls without finding the fence. That string of balls without a four or six was broken when Misbah smashed a Hero Maximum straight down the ground.

Corbin eventually departed caught on the boundary and that brought Pollard to the crease with 62 runs needed off the final six overs.

When Misbah went for 21 there was a huge amount for Pollard and Jason Holder to do and the packed Trinidad crowd were cheering every dot ball their team managed to create. They too struggled to play the big shots, but when Botha dropped Pollard the Tridents still had hope despite the rising run rate but it was not to be.

With two overs to go the Tridents needed 36 runs from the 12 remaining deliveries. The 19th over was bowled by Dwayne Bravo, the tournaments leading wicket taker, and it went for just 10 runs meaning 26 was needed off the last.

That was always too many as the celebration in the crowd began before the final ball was delivered and continued long after.

EDITOR’S NOTE: Readers are asked to note that the photographs and article of the CPL T20 finals between Trinidad and Tobago’s Red Steel and Barbados’ Tridents appearing on Pages 6 and 7 should be credited to the Caribbean Premier League..