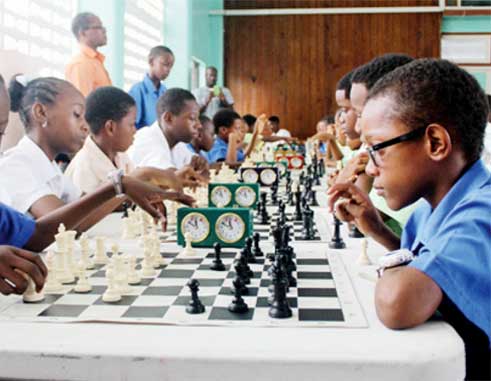 WITH the recently-concluded EC Global Schools’ Chess Tournament producing another batch of talented players, the increased popularity of the game among students seems to be paying off rich dividends.

This year marked the eighth anniversary of the EC-Global-sponsored chess tournament. However, there have been at least four similar hosting of the tournament prior to that.

The tournament is organized by the National Community Foundation (NCF) and Executive Director, Madonna Monrose, said students from 15 of the island’s secondary and primary schools participated.

“We’re seeing a lot of enthusiasm among the students this year,” Monrose told The VOICE. “Those who participated were very excited and seemed to be very competitive. We’re trying to encourage participation. We want the students to be motivated to play the game, so we also give prizes and trophies to those students who perform well at the game.”

Aside from hosting the chess tournament, the NCF runs its national chess programmes — First Move in primary schools and NCF Schools’ Chess Programme in secondary schools. An on-the-ground coordinator liaises with the close to 30 participating schools to ensure that everything runs smoothly. In fact, many schools that fall within Districts 1, 2, 4 and 5 have chess is a part of the curriculum, Monrose said.

“We’ve seen an increase in the number of students actively participating in chess. We’re also getting requests for materials from schools outside of the districts where the Fist Move Chess Programme is being implemented.”

Monrose cited research which indicates that chess helps students with their cognitive skills which enable them to think critically. She said the game allows people to grasp concepts and solve conflicts better than people who don’t play the game. Many of the island’s secondary schools now have their own chess clubs, she said.

Below are the results of this year’s chess tournament held at the Castries City Hall:

Fletcher placed second in the tournament’s Primary Schools category last year. This year, she entered the competition for the first time as a secondary school student, picking up the award for the top female participant. The game has been good to her, she told The VOICE.

“Playing chess has improved my mathematics skills a lot,” Fletcher said. “Even though I was good at mathematics, by playing the game I was able to bring up my skills in that subject.”