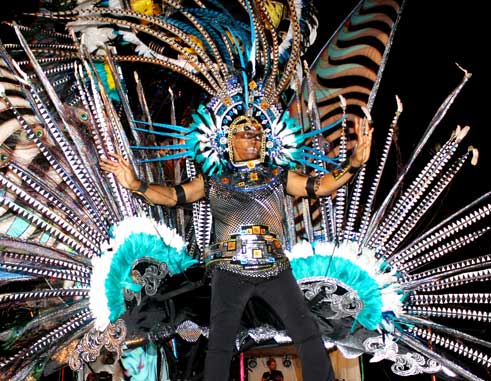 CARNIVAL-RELATED activities will dominate the weekend as this year’s season comes to an end next Tuesday.

If calypsonians do get their demands met, tonight’s Calypso Monarch will go ahead as planned at the National Cultural Centre grounds. Four calypsonians in tonight’s final – Educator, Mary G, Invader and Menell – spoke to the media yesterday, voicing the concerns regarding payment for their performances this season.

According to Educator, whose real name is Protus Auguste, the artistes made an appeal to START (St. Lucia Association of Registered Tents) for part-payment of their performance fees during the current season. However, he said, that request has not been forthcoming from START, an umbrella organization of the island’s calypso and soca tents.

Educator, who has won the Calypso Monarch thrice, said START’s response to the request has been that the contracts the artistes signed with START stipulates that START would pay their performances when the contract period would have expired on July 31 this year.

“We’re not starting a war. All we’re asking is to be given part of what we are owed,” Educator said.

The VOICE was furnished with a copy of the artiste contract referred to by Educator. One of the clauses reads that START “shall pay the performer by cheques within seven (7) working days but not more than fourteen (14) working days after the final performance of the contract period.” Educator pointed to other parts of the contract that have been breached, including the number of shows for the season being decreased. He believes START is being unfair as he, like other calypsoinians, have been owed by their respective tents for years.

Three-time monarch, Menell Delice, said the $1000 she received from the Carnival Planning & Management Agency (CPMA) does little to defray the expenses incurred for the artistes’ performances on the night of the Calypso Monarch. She said she has not received a cent of the $3000 from START for the shows she has performed at during the season. Artistes, Menell said, deserve better.

“We need some money to make us feel comfortable, to make us go on with our show” Menell told The VOICE. “That’s the only thing we want.”

Four-time monarch, Ignatius “Invader” Tisin, said he is not surprised at the situation calypso has found itself in. Many of the artistes, he said, are to blame, principally because they do not take the law of contracts seriously. Nevertheless, he believes those running the tents need to manage calypso’s affairs better. Tonight’s final, he said, might be in jeopardy because of that despite calypsonians having signed contracts with the CPMA.

“At last, the calypsonians have decided (that) it’s time to talk. Some of them are saying that the possibility of not performing in the final is very possible because without the money, we can’t do it,” Tisin said.

START’s Communications Officer, Cecil Charles, said the aggrieved calypsonians needed to be guided by the contract they signed with START. Despite agreeing with the calypsonians to an extent, he said START was not to blame for the artistes’ grievances since the Calypso Monarch falls under the aegis of the CPMA. He said the artistes should be receiving their payments from START when their contracts expired shortly.

Meanwhile, Adrian Augier was adjudged king at this year’s King and Queen of the Bands held last Thursday at the National Cultural Centre grounds.
Augier’s portrayal of “Quetzalcoatl” Legend of The Feathered Serpent” picked up 452 points to win the title for his band, The Tribe of Twel’s theme, “Amerindia: Legacy of the Aztecs”. Red Unlimited’s Giovani St. Omer came in second with 429 points for “National Treasure” while MasMasters Mas Camp’s Cedric Laurent placed third with 410 points for “Congo Man”.

Sharon Tanner won in the queen category, picking up 427 points for Tribe of Twel’s “Xochiquetzal”. Natanni St. Omer came in second with 423 points for Red Unlimited’s “Blazing Red” while Tribe of Twel’s Tanisha Nicky Williams placed third with 413 points with “Daughter of Tonatiuh”.

Steel pan action was expected to play off at this year’s Panorama at Beausejour Cricket Ground last evening. The music continues this weekend as the fiercely-competitive Groovy and Party Soca Monarch sounds off at the same venue tomorrow evening with J’Ouvert to follow.

The carnival season will come to a climax on Tuesday with the two-day Parade of the Bands which begins on Monday.

Meanwhile, the Carnival Bands Association (CBA) is urging revellers and the general public to have a safe and fun-filled carnival. In a press release issued yesterday, CBA president, Sonia Sifflet, called on all to follow instructions given by police so as to ensure all runs smoothly. Sifflet also urged band leaders to exercise responsibility in ensuring their band members follow the rules.

Among the advice offered by Sifflet are the following: drinking water continuously to avoid dehydration, drinking alcohol responsibly, not serving alcohol to minors, revellers not straying from their respective bands, respecting property along the parade route and being each other’s keeper.