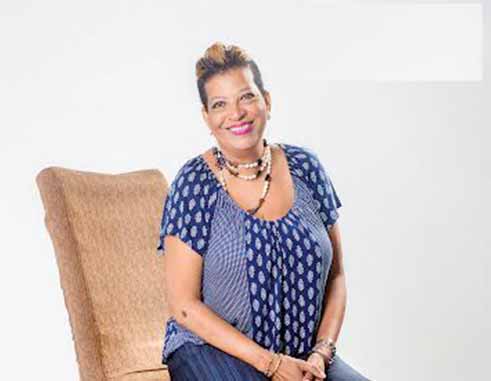 TODAY’S FITC is the woman that I owe my journalistic career to and so she has built a permanent spot in my heart.

Forever the life of the party and a truly free spirit, Sharon Williams exudes positivity and joyousness. However, Williams to those who know her well enough is the living and breathing image of the Crying Clown as behind all the laughter and everything fun that makes up Sharon Williams, is a disease that claims lives and limbs on a daily basis especially here in St. Lucia.

Williams who is a mother, wife and friend is also a Type II Diabetic.

In an excerpt taken from The Jamaica Gleaner; “According to the study done by Dr Ken Earl, up to eight per cent of St. Lucia’s adult population are diabetic and the island has the fastest growing number of diabetics across the nine-member sub-regional Organisation of Eastern Caribbean States.”

The Journalist/Publicist by profession puts her all into her work and in her own words, it’s hard to separate her personal life and her profession as she is like a rolling stone who is constantly promoting others and shining light on the small but important aspects of life.

Today, I turned the tables and shone the spotlight on her instead only this time, I’m not only highlighting a marvellous human being, I’m highlighting a major issue that affects way too many St. Lucians so in a way, I’m still allowing her to promote…a chance to promote awareness.

The VOICE: How long have you been living with diabetes?

Sharon: You know I can’t remember the year I was diagnosed. I always have to refer to my daughter because she remembers better than me. But I’d say 15 years this year…yeah…I think so

The VOICE: At the time you were diagnosed, did you understand the gravity of this disease and what it meant for the rest of your life?

Sharon: Hmmm…well, before I was diagnosed I’d been told I was borderline on about two occasions , but it was never really explained to me. At the time I remember thinking ahhh borderline…what’s that and I went back on my merry way, not giving it a thought. Then I fell over the edge I guess. It had always been on my mind though and so one day I just walked into the lab and said I’d come to do a sugar testing. That is done over a period of time, like an entire morning and blood was drawn I swear about 12 times. My memory might be exaggerating, but I was stuck at least eight times. My reading was so high, think in the 400’s that I was admitted right away. In fact I was sitting outside waiting for my ride when a Lab Tech came frantically through the door, looking for me and said the doctor wanted to see me urgently. Kinda alarming….but I waited patiently for the doc who came in and told me that I was not allowed to go home because I had diabetes and I cried, why? Because I could not go home and we were having a beach party that weekend. (Laughs) I know that this illness is quite serious and is in fact terminal, but what in life isn’t huh? Life is terminal and I’m happy to know what I have so I can treat it and deal with it. There are so many people walking around oblivious to what is affecting them terminally, health wise and otherwise.

The VOICE: How has it affected you, your livelihood and that of your family?

Sharon: Hmmm… the only way it has affected me is that it has heightened my awareness to what I should and should not do and that is mainly to do with diet. I was never really a sugar/sweets person, but now that I know I shouldn’t I want to, know what I mean? So it is a struggle for me daily to keep away from sweet stuff that is ohhh so sweet and delicious. I live with a lot of guilt. Guilty about my not so healthy choices when it comes to sweets and I will tell anyone who is living with someone who has Diabetes that they must be supportive not only in being there and being encouraging, but by not bringing sweet goodies into the house. I read once that there is no such thing as willpower and I tend to agree. Well, I was one happy camper reading that because I grapple with my willpower or lack thereof every day and I feel so guilty. I have Type II diabetes which is controlled by diet, exercise and meds and I struggle for the day when I can balance all three and balance and regulate my blood sugar. The struggle is real I tell you.

The VOICE: Does anyone else in your immediate family have the same disease?

Sharon: From what I understand, I have it quite strong on either side of my family. The doctor told me that with my family history, I did not stand a prayer (whispering: which makes me feel better and releases me from some guilt, knowing that it was not all the soft drinks and “kochonni” I swallowed pre-diabetes)

The VOICE: Have you ever had any near misses or dangerous episodes?

Sharon: To date no…knocking wood….I still try to exercise. I go walking in the morning, at least six miles, although I’ve been negligent these last few months to be honest. I hope the jumping I did for carnival makes up for some of it. I have what I call my “Diabetic Episodes” where I feel just sick and lethargic. I have irritability issues too which is part diabetes, part my personality I believe, haha. As you can see I don’t dwell on it and while I know the gravity of the illness I try not to let it take over my life. I drink lots of water, try to eat right – one carb, one meat, vegetables and fruits which I love anyway. My challenge is the sweets and the exercise…less of one and more of the other.

The VOICE: What do you miss about your lifestyle if anything at all before diabetes?

Sharon: Nothing really. I could do without the guilty feelings every time I put something delicious in my mouth. I read labels like crazy now but that’s not on the downside because I like to read and I love all the information and you would be surprised at what’s hidden in food labels. Everyone should read them. I dislike that I’m on meds for the rest of my life. I fear for my kidneys and liver and the effect of constant medication and this disease on them. But really I don’t over think it, because it would just send me crazy with fear. I just live my life…that’s the most and the best that I can do really and thank God for it too, better believe that!

The VOICE: St. Lucia has the highest rate of diabetes per capita in the world, so it is common knowledge that there are thousands of locals in your shoes. What advice would you give them to help them live healthy lifestyles?

Sharon: Take care of yourself, listen to your doctors, read up on the illness and try as best you can to just do what’s right for you. I would like to challenge restaurants and food providers to introduce diabetes health dishes, food and drink to their menus. Do you know how hard it is to even get a sugar free drink at an event? You just have to resort to water and so while everyone is having a whale of a time with their alcohol or other tasty drinks, you’re there championing on with your bottle of water trying to ignore the sodas, and shandies, wine and other yummy drinks. It’s hard, seriously it is and it is soooo easy to backslide and then you pay the price. With a nation so full they say of diabetics, everybody knows at least one diabetic or has one living in their homes. Why aren’t there more measures to make us comfortable and happy?

The VOICE: Finally, as dangerous as the disease is, it is not necessarily a death sentence, to those newly diagnosed individuals who are living in fear or with a ton of worry; what words of wisdom and encouragement would you share with them?

Sharon: Read up, hahaha! Just live your life, take care of yourself and just try your best, because after all that is all we can do, diabetic or not, right?