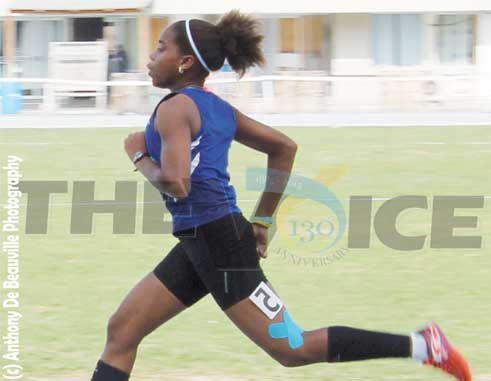 SHE is still a teenager; she attends the St.Joseph’s Convent and will be entering Form 3 when the new academic school year reopens in September. Like most young and aspiring athletes she is dreaming big and I mean big as this 13 year old plans on representing St. Lucia at the Olympic Games in the future.

She goes by the name of Desray Desir, and her favourite subject at school is mathand she says she has a passion for the subject.

Desray is one of the many female athletes in the past year who has caught my attention on the track, but I must admit, she has been plagued by injuries. At the time of this interview, interestingly, she was injury free and has rebounded magnificently following her rehabilitation. With such determination and perseverance one expects to see her blaze the track in her events.

VOICE: Tell me, how it all started for you on the track.

Desray: Well, my brother Desran Desir always wanted me to run. He competes in the long jump event. In fact it did really start from kindergarten, then at primary school they kept on pushing me.

Voice: What is your favourite event?

Desray: I compete in the 100 metres, long jump and high jump. I started the high jump event in Form 1 and at that time I was not expecting to do well in it”.

Voice: Who is your favourite athlete?

Desray: I look up to her. She came down to St.Lucia and she was the one training me and pushing me to do high jump and long jump. She made me jump my personal best in high jump. I moved from 1.35 metres to 1.50 metres in a matter of a week. My coach Cuthbert Modeste has been helping me as well; I used to cry a lot at training as it was an extra challenge for me, but now I have overcome that hurdle. Makeba

Voice: What has it been like for you this year in terms of your performance at the various championships?

Desray: For school sports I broke the long jump record at my school, I have been doing very well. At the Independence Games even though I may not be coming first, because I have been competing with my team mate Julien Alfred, I am still working to get to her level and even better”. At the Independence Games I did the heptathlon, because my coach made me do it so I could qualify for the Caribbean and Central America Age Group Championship, and in the process I won six medals. For Inter Secondary I did very well, I was in a division with Forms 2’s and 3’s placing second behind Leon Hess Comprehensive and team mate Julien Alfred”. 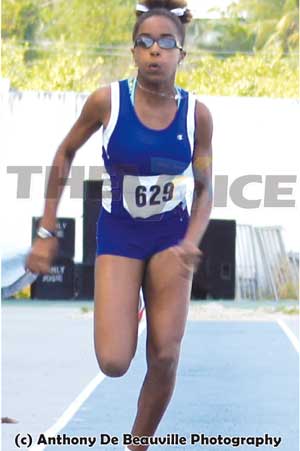 Voice: What are your best times, heights and distances in the events that you have participated before you started competing in the Heptathlon?

DESRAY: In the 100m -12.48 seconds, high jump 1.50 metres, long jump 4.96 metres. long jump I really want to jump 5.00 metres. At the inter secondary school sports meet I was told that I jump 5.00 metres, but the official said it was a mistake and that brought down my confidence about the event, but I am expecting to better my times, heights and distances.

Voice: At the National Individual Track and Field Championship you participated in the Heptathlon are you satisfied with your overall performance?

Desray: Yes I am satisfied, despite its challenges.

Voice: You’re still pretty young. Any dreams at participating at a major track and field championship, such as the Olympic Games?

Desray: St. Lucia will be hosting the Commonwealth Youth Games in 2017, and I am expecting to compete at that championship, I am working towards it, because it will be a great opportunity for me. In 2016 for the Carifta Games I am expecting to qualify again, because this year I qualified and they told me I will not be able to go because of my age. So come 2016 look out for me .Most certainly apart from the Carifta Games, the Commonwealth Youth Games and World Juniors, I will continue to work hard, meet the Olympic standards set so I will have a chance to represent St.Lucia around 2020 or 2024”.

Voice: What can one expect from you at the CAC Age Group Championship in Trinidad and Tobago this weekend?

Desray: “I am looking to bring my current form to the meet, give it my all in the events that I will be participating in and hopefully get a few podium calls in the process.