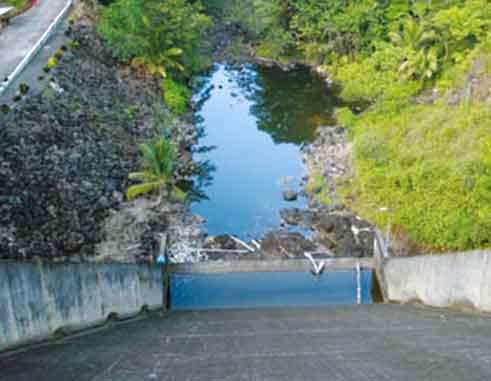 THE Water and Sewerage Company (WASCO) Inc., says it is closely monitoring reservoir levels to ensure that the island adequately maintains its water reserves while drought conditions persist.

WASCO revealed that despite the yield from recent rains, conditions are not yet back to normal.

“Over the last week commencing Monday, July 13, the level of the dam increased by 4.4 feet,” the company stated. “This was as a result of the passage of a tropical wave. The increase in rainfall coupled with the increase in flow helped in increased production at the Theobalds treatment plant, thereby allowing a reduction on rationing in some areas, such as Sans Soucis to Union.

“It must be noted however, that the yield from that rainfall has not brought things back to normal. At Hill 20, the production went up to 100 percent during the rainfall period but has declined to 62 percent production; while the level at the John Compton Dam was recorded at 327.8 ft. on July 20—a 0.1 ft. decrease in water levels.”

WASCO added that on July 20 last year, the water level at the dam was recorded at 321.0 feet.