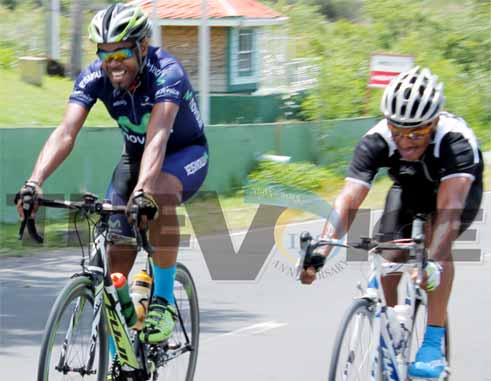 Race Winston Williams to emerge victorious in the 60 km cycling race from the Castries waterfront to Vieux Fort last Sunday.

Then came the Barre de l’isle where the test began. First TerrianoFelicien was off to the back as Esnard, Winston Williams, Norbert and Junior National Champion Noel took to the lead on the climb.

Half way up the Barre de l’isle with about 18km to go Norbert picked up the pace and rode away taking a 2 minute advantageand leaving the others behind. Esnard, Noel and Williams were the others to climb next in pursuit of Norbert.

Meanwhile, Alphonse, Mitchel and Joseph a little further back were trying to catch up with the riders ahead. Norbert kept pressing on ahead. The pace of the two senior riders Williams and Esnard was too much for Junior Champion Noel as he was off the back of the duo as they climbed the Fond d’Or Hill. Noel was joined by Joseph and Alphonse by the Dennery Police Station. Ahead Winston Williams and Esnard were picking up the pace in pursuit of Norbert coming out of Dennery.

Norbert at that point was climbing with a steady cadence and kept soldiering on with a rhythm, displaying superior climbing ability while remaining ahead and out of sight.

The two seniors came within sight of Norbert on the Mon Repos hill. However Norbert was able to hold them off keeping his momentum on the climb. Norbert still maintained a lead of 1 minute 25 seconds as he approached La Resource Vieux Fort.

There was no turning back as Norbert with less than 2km to go was riding at 45km per hour with the tail wind towards the finish winning in a time of 2 hours 12 minutes 26.29 seconds. Esnard came in second edging out Williams into 3rd place.