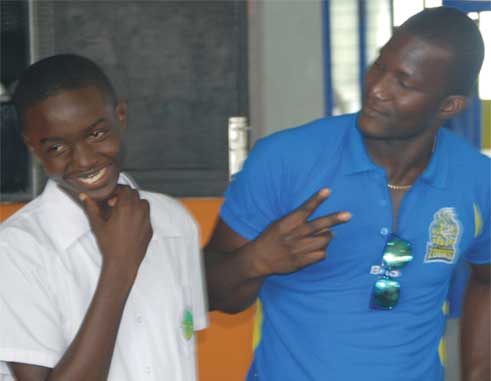 The visit was to sensitize the students about the 2015 CPL, meet some top international players and gain support for the matches scheduled for the Beausejour Cricket Ground starting here tomorrow.

Zouks captain Darren Sammy shared his life story as a cricketer and how it all started for him, Sammy encouraged the students especially the young cricketers at the school to remain focused and to work hard at both their game and their academics if they are to be successful in life and to make their parents and teachers proud.

School principal Terrance Fernelon thanked the visiting contingent on behalf of his entire staff and well over 525 students. He wished the Zouks team all the best in this year’s tournament. Fernelon also took time out to introduce one of his outstanding students in the game KimaniMelius, who recently scored 275 runs in the Massy United Insurance Under – 19 Secondary School Tournament and was voted the MVP at the recently held Windward Islands under -15 tournament which St.Lucia won for the second straight year.

The VOICE spoke to Damien O’Donohoe, CEO of the Hero Caribbean Premier League about this years tournament and plans for the four matches scheduled for the Beausejour Cricket Ground.

Said O’Donohoe: ‘It’s really exciting. We’re up here in Babonneau with some of the players and it’s something that we are really encouraging. It’s so important for the community and it’s about inspiring young kids with the right discipline and mindset that they can do anything they want in this world. We set the CPL up three years ago and people laughed at us. They said it could never happen and now suddenly it’s the biggest sporting event in the Caribbean. On Wednesday we announced that there is an opportunity for somebody to win US$1,000,000.00, somebody that comes to CPL, who catches a ball in one of the home games and they will be brought to the finals and if they get a chance to do the same they get to go home with US$1,000,000 cash which is quite a prize. The excitement is already building, first game is on Sunday and the Zouks have had a couple of bad years but have strengthened their team”.

Asked about the feedback the Zouks were getting from visiting schools, O’Donohoe said: “The feedback is just absolutely brilliant; you know for the kids to come and meet their heroes and hear stories. Darren Sammy was telling the story about how his mother was 15 years of age when she gave birth to him and the pride it gives him that he’s gone on to do the best and be the best that he can possibly be and get to the very top of his game and the pride that it gives him not just for himself but for his mom and dad. It means the absolute world to him. For these children to meet people like Darren and Johnson, local heroes, it can only inspire those kids to stay off the street and be the best they can possibly be”.

Damien: “My final words is just to thank the people of St. Lucia again for having us back; it a really special tournament and its one that is very firmly established on the international calendar so with great thanks to Digicel again that we can be here but it’s the biggest tournament in the Caribbean and it’s now one of the biggest tournaments in the world and I want the people of St. Lucia to do us proud”.