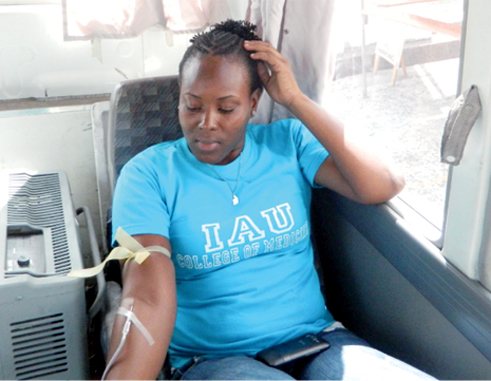 THE International American University of Medicine (IAU), in collaboration with the St. Jude hospital celebrated recently World Blood Donor Day with a mega blood donation drive, which attracted scores of residents from the south of the island.

The occasion, which was attended by representatives from the Pan American Health Organization (PAHO), St. Jude hospital and the St. Lucia Red Cross, was held on the school’s compound at Beane Field Vieux Fort.

The theme of this year’s campaign was “Thank you for saving my life”. It focused on thanking blood donors who saved lives every day through their blood donations and encouraged more people all over the world to donate blood voluntarily and regularly

In her remarks, Country Programme Specialist of PAHO, Valarie Beach-Horne said : “ Transfusion of blood and blood products helps to save lives. Blood transfusion can help patients suffering from life-threatening conditions to live longer and with a higher quality of life. Blood donation also supports complex medical and surgical procedures, and has an essential life-saving role in maternal and child care, and during man- made and natural disasters.

She said the ideal situation was for 100% of donation of blood to come from unpaid volunteers.

“In recent years, some Caribbean countries including St. Lucia, have shown a significant improvement in the increase of voluntary non remunerated donors. However, of the 41 countries and territories in Latin America and the Caribbean, only 12 have achieved this benchmark,” she added.

Beach-Horne said PAHO and its member states were working diligently to improve universal access to safe blood through a new regional plan of Action.

The Director General the St Lucia Red Cross. , Terrencia Gaillard, in her remarks said that the Red Cross has encouraged young people to donate blood, adding that over the years, there has been an increase in donations by young people which was commendable.

She thanked IAU for undertaking such an initiative, adding that it has helped save lives.

“Because of your effort there is always blood at St. Jude Hospital,” Gaillard said.
Persons who donated blood at the event said they did so because they were aware of the importance of such a philanthropic exercise.

The event, which the school has been organizing over the past seven years, has been a huge success. The school created history here some years ago, when 63 units of blood were donated at one of its event, which represents the largest amount of blood donated in a single event in the island.

Public Relations Officer of IAU, SibiGopalakrishna, said he was very pleased with the level of support the public demonstrated in the activity.

“The event has always been a success and it is getting bigger and better every year,” he said.

Gopalakrishna said the school sees itself not only as a learning institution, but also a partner in the development of the country.

“We see ourselves as an integral part of the community and we have demonstrated this in many ways,” he said.