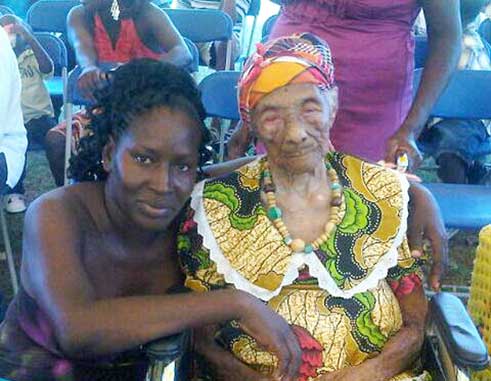 TWO years ago the entire community of MorneDor, Anse la Raye thought that she would not have made it to 111 years, so they held a grand party for her on the community’s playing field.

But Christina Cetoute had other ideas. Though sightless and bed-ridden her active mind rejected the community’s premonitions. Today she celebrates another milestone, which is another birthday, her 112th.

“We will be having a quiet celebration. It will be a time for reflection” Cetoute’s great, great grandniece Joyce Glasgow said.

Cetoute who is better known as ‘Ma Fleur’ is well loved in the community to the extent that on her 110th birthday the MorneDor community threw her a lavish party, one that is still remembered today because of its magnitude and the reasons for it.

“Everyone thought she would not make it for her 111th birthday. There was a church service on the playing field. The whole community paid tribute to her. The district representative in parliament was there. It was a community thing,” Glasgow said.

She has outlived her two children and although she’s been bedridden for the past ten years her love for red snapper is still remembered.

‘She loves her Red Snapper. She would go down to the Roseau Beach in the early morning and wait for the fishermen to come in with the fish. She would wait all day if needs be and not leave without a Red Snapper,” Glasgow said.

A farmer by profession, Cetoute tilled the soil for many, many years, according to Glasgow.

Prior to being bedridden she would mostly be found in her garden caring for her sweet potatoes, dasheen and yams, ground provisions she would sell in her community.

Cetoute is cared for by family members who say that she is a very loving and compassionate human being.

Proof of her age is seen on her Saint Lucian ID Card. She is in the process of obtaining a new birth certificate.

This year, two women claiming the title of “the world’s oldest person” passed away. On April 1, MisaoOkawa of Japan, cited by the Guinness Book of R4ecords, died at 117. A week later, the next person next in kline to hold the title, Gertrude Weraver of the United States, passed away at 116. Now the accolade has passed on to Jeralean Talley of Inskter, Michigan, who turned 116 on May 23.

Cetoute is believed to be the oldest person currently living in St Lucia.