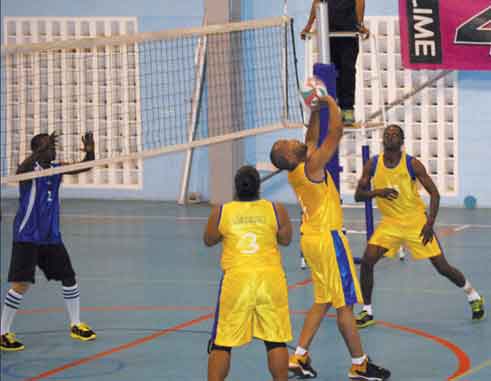 THE excitement continues on Friday in the St.Lucia Chamber of Commerce / Industry and Agriculture Commercial Volleyball League presently taking place at the Beausejour Indoor Facility.

Defending champions Police will seek to continue their good run of form when they play Goddard Group of Companies from 6:30 p.m. and Ministry of Education meets ECFH/BOSL from 7:00 p.m.

Saturday will see the commencement of the quarter final round of the tournament at the same venue.

On Saturday, the showpiece continued with wins for ECFH / BOSL, Police and Sandals.

Police was made to work hard for their victory for the first time in this year’s tournament by a determined Ministry of Education that had the experience national setter ServinMongroo on its roster. Police won 2-1. Set scores – (15-25, 25-18, 7-15).

In what can best be described as a lop sided affair in the final game of the evening in Group B. Sandals defeating breezed past LUCELEC 2 – 0. Set scores (25-6, 25-13).