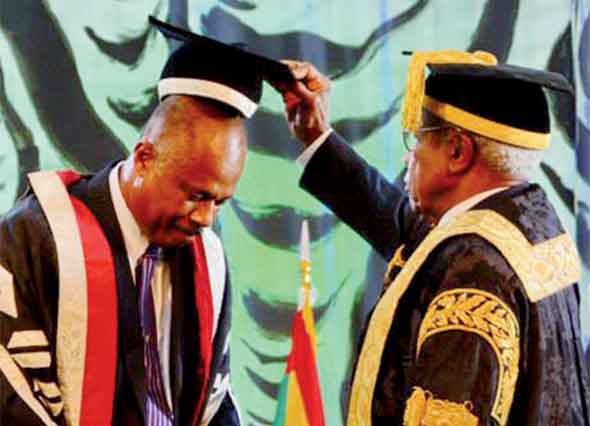 This ceremonial installation, steeped in University tradition, and hosted by The UWI Chancellor, Sir George Alleyne, points to a significant intersection of tradition and renewal in the life of the regional institution.

It is an important rite signalling the conferment of authority and the formal welcoming of the incoming Vice-Chancellor into the academy. Attended by representatives of regional governments, business, other academic and international organizations and civic society, at the regional and international levels, as well as members of The University staff from across the region, the special ceremony incorporates centuries old elements such as academic regalia, the Flag, Academic and Chancellor’s processions, and the mace; which are based on the tradition of the medieval university.

The Vice-Chancellor is the principal academic and administrative officer of the regional institution, The University of the West Indies. The Vice-Chancellor of The UWI is charged with advancing the University’s academic reputation and global standing, while championing the direction outlined in the strategic plan for the remaining period of the 2012-2017 plan and beyond. Pursuant to Statute 5(a) “The Vice Chancellor shall be ex-officio Chair of the Senate and, save in the case of committees under Statute 10.4 and of excepted Committees, of all committees of the Council and Senate provided that the Vice-Chancellor may appoint any person being a member of the University to be Chair of any such Committee.”

The Vice Chancellor, by Statute 6, is charged with maintaining and promoting the efficiency and good order of the University for which the Vice-Chancellor shall be responsible to the Council. In concert with Campus principals, he provides strategic direction and leadership and helps to position and present The University internationally, nationally and regionally. He works closely with the campuses to ensure a coherent vision across all the constituent parts of the University so that its governance, management and administration are efficient and effective. He also carries out important ceremonial and civic duties including officiating at matriculation and degree ceremonies.

Before assuming the office of Vice-Chancellor of The University of the West Indies on May 1, Professor Sir Hilary was Principal and Pro Vice-Chancellor of The University of the West Indies, Cave Hill Campus, Barbados for thirteen years (2002-2015). He has emerged as a distinguished university administrator, internationally reputed Economic Historian, and transformational leader in higher education. He has had a spectacular journey within The UWI, entering as a temporary assistant lecturer in 1979 at the Mona campus. In short time he was promoted to Senior Lecturer and then to the rank of Reader. In 1991, at age 36, he was promoted to a Personal Professorship, then the youngest in the history of the university.

The international recognition of his competence has been global. He is Vice President of the International Task force for the UNESCO Slave Route Project; a consultant for the UNESCO Cities for Peace Global Programme; and in 2014 was appointed by the Secretary General of the United Nations, Ban Ki-Moon, to his inaugural United Nations Secretary-General’s Scientific Advisory Board on sustainable development.

Sir Hilary is, in addition, a respected playwright and member of the theatre community. Eight of his plays have been staged to popular acclaim. In the corporate community his footprint is well established. He is a long serving director of Sagicor Financial Corporation, and has served as a director of its principal subsidiaries Sagicor Jamaica Ltd, and Sagicor Barbados Ltd. He is a director of Cable and Wireless Barbados Ltd, and is Chairman of The University of the West Indies Press.

Sir Hilary received his higher education in the United Kingdom and graduated with a BA (Hons) degree in Economic and Social History from Hull University in 1976, and a PhD from the same university in 1980. He has received numerous awards including Honorary Doctor of Letters (Brock); (Glasgow); (Hull); (KNUST), in recognition of his major contribution to academic research into transatlantic slavery, popular culture, and sport. He is an editor of the UNESCO General History of Africa series.

Sir Hilary was made a Commander Knight of St Andrew (KA), Barbados’ highest honour, in recognition of his distinguished service in the field of education, in particular at university level, and his dedication to the furtherance of the arts and sport, in particular cricket.